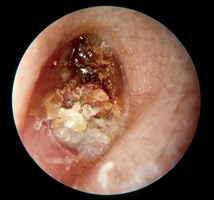 This post is not for the squeamish. If you’re grossed out easily–stop reading–because it’s about cerumen…yes, earwax. If you’ve ever had a feeling of fullness in one ear or both, or even heard crackling or swishing sounds, you may have an ear canal full of wax. I’ve had it before, a potato farm in fact, and was just reminded today of the possibility when a client asked me about his “stuffed up ear”.

Earwax or cerumen is the body’s natural protector of the ear canal–Innate Intelligence at work in the same way tears, mucus, and saliva protect their respective entrance ways from microorganisms. A yellowish waxy substance, cerumen protects the skin of the human ear canal, assists in cleaning and lubrication, and also provides protection from bacteria, fungi, insects and water. But when earwax gets impacted into the ear canal, it can lead to some annoyances and a few flat out problems.

Impacted cerumen can block the auditory canal leading to tinnitus (a ringing, swishing, or other type of noise). Because of the multitude of head noises, anything that blocks the ear canal lessens incoming noises from the outside environment, and thus increases one’s awareness of the inner movements of fluids and such. Water can also get trapped in the blocked canal creating a swishing sound, particularly on moving the head. Anybody who has experienced this know how unnerving it can be.

Cerumen can get impacted from using a Q-tip to clean the ears. That was the case with me, and I was certain my ears were clean, as was my client today, but I soon learned otherwise. While in chiropractic college, my first student intern took a look in my ears and exclaimed, “Holy ear funk–you’ve got a lot of wax!” Nonsense I thought, but he advised I buy an irrigation tool and clean out my ear canals that way. And boy was he right. Pencil eraser shaped bullets washed out of my ears. Yeah, it was a sight.

But it wasn’t until I went to see an ENT (ears, nose and throat doctor) for severe sinus headaches that I had the shock of my life. He went into my ear with a little sculpting like tool, and out came a rock the size of Gibraltar. Truly I was shocked by the size because I would have never even guessed the ear canal to be able to hold such a geological specimen. Dang! 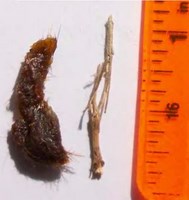 Although tinnitus can be caused by a number of other things, impacted earwax can lead to some real hearing problems. One is conductive hearing loss. As opposed to sensorineural hearing loss, which is an actual insult to the auditory nerve, conductive hearing loss results from the blockage of sound waves into the ear canal. So if you find yourself saying, “Huh? What? Whadja say?” a lot…you might want to get your ears checked for impacted wax.

Some other symptoms of impacted cerumen:

My client today was quick and adamant to let me know his ears were clean. And I relayed my Rock of Gibraltar story to him, because…yeah, I thought mine were too. But unless someone is looking in with an otoscope…uh, don’t be so sure. And if you just can’t stomach going to the doctor, then purchase an irrigation tool kit. This setup will have some oil drops to place in your ears to soften the wax. After a few minutes you can stat squirting water in with the bulb, and trust me when I say you might be in for a shock. Just don’t be so quick with putting a lid on the job, because it may take a number of squirts–ten, twenty, just hang in there. And, really, stop the Q-tip stuff. Believe me that activity as a regular practice is probably doing more harm then good by really packing that wax in tight. Okay, you don’t want to be oozing cerumen on your collar–a Q-tip can be sometimes appropriate, but I certainly wouldn’t make it a daily habit.

There you go: If you’ve made it this far, you’ve got an iron stomach. Or very waxy ears. What?! Huh?! Whadja say?! Clean your ears, pops.