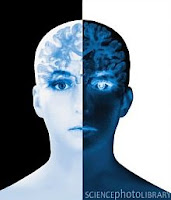 Here’s an interesting thought: Humans may subconsciously create pain conditions in their bodies to relieve emotional stresses.  Hmmm…what do you think?  Are our physical ailments simply a way for us to deal with mental misperceptions?  Check it out:

Scientist have recently found that people who practice self-mutilation, clinically known as nonsuicidal self-injury (NSSI), show decreased brain activity in areas responsible for negative emotions (anterior cingulate and the amygdala), while activity in the dorsolateral prefrontal cortex—an area responsible for pain integration—increased as a result of pain.

To explain the findings, researchers have toyed with the idea that self-mutilators actually enjoy pain.  Wrong—since people suffering from NSSI primarily engage in self-inflicted pain–usually cutting or burning the skin—during times of increased stress.  Researchers also proposed that perhaps self-mutilators are attempting to punish themselves.  The problem with this reasoning, however, is that, by definition, punishments increase negative emotions and make behaviors less likely to occur in the future.  Not the case with those practicing NSSI.

In a second study, scientists found that removal of various forms of experimental pain were associated with a reduction in negative emotion in people with no history of NSSI.  What makes these findings especially interesting are that both general negative emotion and pain-induced negative emotion are processed in the same brain areas.  That means that pain relief and emotional relief are essentially the same thing.  Many of us know that pain-numbing drugs like alcohol also temporarily reduce emotional pain (until, of course, they lead to new forms of pain).  But recent research has shown that simple over-the-counter analgesics (pain relievers) also reduce emotional pain.

So scientists believe that self-inflicted pain, at least as it relates to people engaging in NSSI, may serve the function of reducing emotional pain or stress.  I propose that all pain states, thus all illnesses, result from the mind’s attempt to balance emotional events.  I’m not saying that illness is merely due to negative thinking, because I think any exaggerated thought process–whether positive or negative–can lead to disproportionate emotions.  I’m saying any unbalanced emotion can ultimately lead to illness.

I am fascinated by this study as I think it opens doors to the workings of the mind and it’s involvement in physical experience, including health and disease.