Freeway Air Could Cause Brain Damage 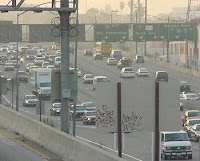 Here’s a real estate tip: You’ll find massive deals on homes and rentals located next to freeways in the near future.  How do I know?  Because recent research shows that the air around freeways is filled with tiny particles and debris that could lead to brain damage, so you’d be crazy to move near a highway or major commuter road.  Check it:

Researchers from the University of Southern California reported in the journal Environmental Health Perspectives that mice subjected to freeway air (not actual freeways) showed gradual brain damage.  Mice neurons for learning and memory were considerably damaged, while signs of premature aging and Alzheimer’s disease were detected in their inflamed brains.  And in developing mice that were exposed to freeway air, neurons did not grow as well as they did in those not exposed to the pollution.  Wow!

The real genius of this study lies in the development of freeway air recreated by scientists.  Co-author, Constantinos Sioutas, developed technology that captured freeway particles–nanoscopic particles from 12-200 nanometers, approximately one-thousandth of the width of a single human hair–in a liquid suspension, which was then used to expose the mice to for relatively short periods (total of 150 hours spread over ten weeks, three five-hour sessions per week).

Freeway air is made up not of gasoline but a mixture of paving material, weathering car parts and burning fossil fuel.  Nice!  To think we’re breathing this muck on a daily basis.  And before you take comfort in your car’s filtration system, just know that nanoscale particulate matter (nPM) passes right through these filters.  Yikes!

“You can’t see them, but they are inhaled and have an effect on brain neurons that raises the possibility of long-term brain health consequences of freeway air.”

Yes, yes…I know mice ain’t man, but mammalian are we both, and what happens to our rodent ancestors could, and probably does, happen to us.  If they are exhibiting brain damage from 150 hours of exposure, then what the heck is happening to our nervous systems on Route 66?  And what can we do about it? 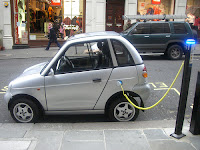 Well, Electric cars aren’t the answer, researchers point out, because the particulates would still be floating around in the air.  Says Finch,

“It would certainly sharply decrease the local concentration of nanoparticles, but then at present, electrical generation still depends upon other combustion processes – coal – that in a larger environment contribute nanoparticles anyway.

It’s a long-term global project to reduce the amount of nanoparticles around the world. Whether we clean up our cars, we still have to clean up our power generation.”

Human autopsies in Mexico found significantly more signs of brain inflammation and early aging among deceased individuals in Mexico City, compared to people in other cities with less pollution…and I live in Los Angeles!

So here’s my advice: Unless you’re looking for dirt-cheap housing, I’d stay away from condos with the freeway view.  We get enough polluted air as it is–nobody needs to freebase it through their front door.  As for our drive-all-day-culture…well, I’ve made it a priority to live close to work, but I do realize that not everybody has that luxury.  Perhaps to you long-distance commuters, I’d say: Stay home on the weekends, and maybe even move to the country.  Hopefully we’ll figure out this pollution mess before we all become the walking demented. 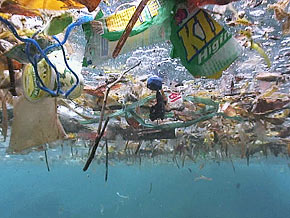