Hoorah for humanity, as doctor-assisted suicide appears to be gaining ground in progressive Western culture. A California state bill allowing for physician-assisted suicide has passed a key legislative committee after failing to clear the legislature this summer. The bill was pulled from consideration in the legislature’s regular session in July but was reintroduced last month as part of a special session on healthcare called by Democratic Governor Jerry Brown. Proponents have been trying to legalize aid-in-dying in California, without success, opposed by the Catholic Church among others.

Doctor-assisted suicide for the terminally ill is the humane practice of putting people out of their misery—people who are suffering from the pain of cancer or other chronic, debilitating illnesses. Proponents state that not only does the practice help those who are suffering, but their families as well, as the costs of keeping a person alive medically can run into the tens of thousands per month. The biggest opponent to doctor-assisted suicide is the Catholic Church, which believes that helping one end one’s life is a sin, and that we should place more focus in encouraging people to live. The church was joined in their opposition by a group of doctors—who believe that their role is to save lives, not to end them—other religious groups, and disability rights activists, who believe that disabled people will be encouraged to end their lives by insurance companies and burnt-out relatives. But once the powerful California Medical Association removed its opposition, backers hoped the measure would finally pass. When the bill failed to get through the California legislation in July, it was reintroduced and passed today by 10-2. Next the bill goes to the assembly finance committee.

Although the issue of euthanasia is an old one—the Ancient Greeks practiced it by administering the poison hemlock—the contemporary issue has been a focus of debate since 1870. While different countries, and even different U.S. states have their varying laws, for the most part in the U.S. it is illegal. Some countries and states recognize and allow voluntary euthanasia, while non-voluntary and involuntary euthanasia is illegal everywhere, with the latter considered murder. Jurisdictions where euthanasia or assisted suicide is legal include the Netherlands, Colombia, Switzerland, Japan, Germany, Belgium, Luxembourg, Estonia, Albania, the US states of Washington, Oregon, Montana, and Vermont and, starting in 2015, the Canadian Province of Quebec. Doctor-assisted suicide differs from euthanasia in that the means of death (usually lethal drug) is self-administered in the former, and doctor administered in the latter. Assisted suicide is legal in the Netherlands, Luxembourg and Switzerland. In the U.S. assisted dying laws are restricted to terminally ill and mentally competent adults, again in Oregon, Montana, Washington, and Vermont.

The controversial topic of doctor-assisted suicide was brought to the forefront of consciousness when last year a 29-year-old cancer patient, Brittany Maynard, moved to Oregon to take advantage of that state’s assisted suicide law. Polls show consistent support of doctor assisted suicide among California voters.

While opponents fear the potentiality for foul play—a valid concern—especially for monetary gain, such as from inheritance or life insurance payouts, and even by insurance companies looking to back out of their financial obligations, the newest form of the California bill addresses these concerns by making it a felony to pressure someone into physician-assisted suicide. It also forbids insurance companies from sending patients information about aid-in-dying drugs unless the patient has requested it.

If you have never been in the presence of a cancer sufferer, or if you have never had excruciating, unrelenting pain yourself, it might be hard to resonate with the idea of doctor-assisted suicide, but take that migraine headache of yours, multiply it by ten, and then imagine it affecting you every single day for ten years—a horrid thought isn’t it? Or your herniated disk, tooth abscess, sinus infection, or whatever, and this probably still does not come to the level of misery a cancer sufferer endures, especially if they are also doing radiation and chemo. According to several studies, more than half of oncologists polled have received requests from a patient wanting to end their life. 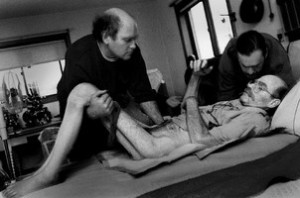 Absolutely parameters need to be in place, and you better believe there will be some foul play—there always is, in every possible aspect of life. But this does not mean that we shouldn’t make the move toward being more humane with regard to our suffering brothers and sisters. I mean, c’mon, we put animals to sleep to save them from suffering, why would we not extend that same dignity to humans? Listen it has to be voluntary—that is, the patient herself must be a part of the decision and the one to administer. Do you think people cannot decide for themselves whether or not they have had enough? My feeling is this bill will eventually pass. Like the medical marijuana laws, society is dropping some of its outdated morality to allow for greater possibilities. I think this is the right way to go; people should have the right to make decisions about their health, their healthcare, and their lives—that is, whether or not to continue. This is humane and allows for the greatest autonomy. How can we go wrong with that?