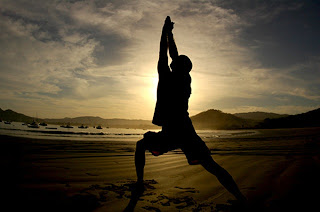 You know how I feel about yoga: I think it’s at the very top of the physical and mental wellness spectrum. From flexibility to strength to mental focus, yoga is the practice of uniting the mind, the body and the spirit. Well, now yoga has been shown to help women ease the symptoms of menopause.

According to research conducted the Swami Vivekananda Yoga Anusandhana Samsthana in Bangalore, India, 120 menopausal women aged 45-50 years old were randomly assigned to yoga practice or simple stretching and strengthening exercises five days a week. The yoga group also listened to lectures on using yoga to manage stress and other yoga-related topics. The non-yoga group listened to lectures on diet, exercise, stress management, and the physiology of menopause. After eight weeks of this routine, the yoga group showed significant reduction in hot flashes, night sweats, and sleep disturbances, as well as improved attention and concentration.

My only criticism of these findings is that the study was conducted in India, where people are generally more exposed to the practice of yoga in their lifetimes. Even if not everybody in the population practices yoga, they have at least a working knowledge of the discipline. What I would really like to see is the same study done in the U.S., or any other country where yoga is not a part of the general culture. I’m certain that the results will be the same, but it’s the only way to know that cultural factors aren’t at play here.

That said, I know the immense power of a regular yoga practice. I know it personally and professionally. Whether you’re pre-menopausal or menopausal, whether you’re male or female, whether you’re old or young, yoga will enhance your life significantly. Try it for six months and you’ll see what I’m talking about–life changing.