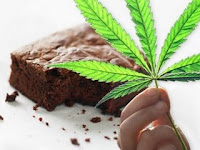 Seriously folks, nobody in their right mind thinks that marijuana use is 100% risk free, do they? My regular readers know how I feel about the marijuana issue–I think it should be legalized. Marijuana as a mind-altering substance is relatively benign–that is, it causes little physical harm when compared to alcohol and tobacco.

But saying that, marijuana is still a foreign substance to the human body, and as such, it will have some negative physiological effects. It doesn’t surprise me that the link to DNA damage and lung cancer has finally been found. It has certainly been suspected for years. Duh! Think about it: smoke of any kind will be toxic to the lungs. Yeah, we can filter some and remain relatively healthy–the body is that strong (self-healing and self-regulating)–but high or long-term exposure will damage the nuclear genetic material.

Marijuana has its medicinal uses, and all joking aside, ingesting it as an additive to food is a less risky alternative. So if you are an AIDS or cancer patient, choose the brownie–it’ll save your breathing apparatus over time.