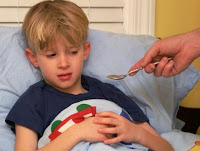 Wow! Dramatic headline, yes? Dramatic but true: More than half a million children in the U.S. have bad reactions or side effects from widely used medicines that require medical treatment and sometimes hospitalization. Why? Because drugs are poisons, that’s why.

According to a new study appearing in the medical journal, Pediatrics, 585,922 children (on average) need to be treated for bad drug reactions every year. Rashes, stomach aches, diarrhea, nausea, vomiting, and accidental overdose are some of the side effects children can suffer. Parents are advised to monitor children closely when giving them medications for the first time. Younger children, under five, are the most commonly affected, accounting for 43 percent of visits to clinics and emergency rooms. Teenagers (15-18) are next at 23 percent of ER visits.

Some pushers, er…doctors, believe that it’s the parents’ fault, that they just don’t understand how to properly measure doses. Michael Cohen, a registered pharmacist and president of the Institute for Safe Medication Practices, said a common problem involves giving young children liquid medicine. Doses can come in drops, teaspoons or milliliters, and parents may mistakenly think those amounts are interchangeable. Uh…whatever.

First it’s the doctors’ and pharmacists’ responsibility to make sure the parent understands dosages. In my opinion, it is the height of arrogance to solely blame parents whom have never been to medical school and have probably passed on the opportunity to take basic pharmacology classes. Second, let’s face the facts: drugs are poisons, plain and simple.

This doesn’t mean drugs are evil or that they shouldn’t be taken–heck no! I’ve said it a million times in this blog, I am enormously grateful for having a multitude of drugs and medications in our arsenal; they are necessary under very specific circumstances. But here’s the problem: We are a drug-happy culture. We run to medications for everything under the sun, when in fact our bodies can and do heal most situations quite adequately.

Are parents at fault? Yes, because they maintain the mind-set that they must protect their child from any suffering whatsoever, remaining blind to the fact that symptoms ARE our bodies way of expressing health. But doctors are at fault, too, because they know better. All drugs are toxins, and every human being is different, so how any particular person responds to a drug will be different too. Doctors are educated–they have been to medical school, and they have taken basic pharmacology classes–so they could be a bit more discriminating in pushing the “all drugs all the time” approach that is typical in most medical offices.

Listen, this is not just a “parents have to be more careful” issue, although they certainly do in a different way. Adverse drug reactions are happening with the same frequency in hospitals. 540,000 hospitalized children have bad drug reactions, including side effects, medicine mix-ups and accidental overdoses every year. Read the article. Drugs are useful and necessary in times of crisis. But if you are giving your child medications for every cough, sniffle or feeling of discomfort (and this includes “sadness”), then you are responsible if something goes wrong, because well…now you know.