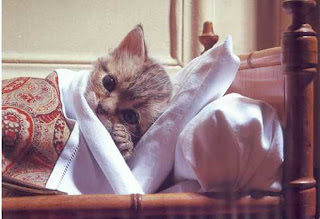 This just in: A cat in Iowa has caught the swine flu. I know, I know…but it’s true. A 13-year-old cat apparently caught the H1N1 virus from one of the people living in the house, the American Veterinary Medical Association (AVMA) said in a statement. It has recovered and does not appear to have infected anyone or anything else.

Holy feline testicles, Batman–what’s this cat doing with the pigs? Apparently nothing–the AVMA website reports that the cat caught the virus from one of the family members of the household. Two of the three family members have been suffering from “flu-like symptoms” before the cat became ill.

Oh my lord, what were they thinking? Had those irresponsible people vaccinated, that helpless cat wouldn’t have fallen ill. Just one more reason to push the swine flu vaccine–quick, call Kathleen Sebelius…hold a press conference!

Dr. Ann Garvey, Veterinarian of the Iowa Department of Public Health said, “This is not completely unexpected, as other strains of influenza have been found in cats in the past.” Phew! I was getting worried there. 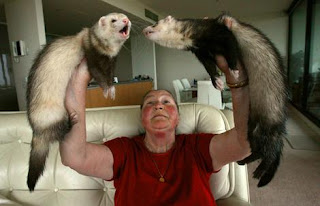 The bad news is dogs and horses are also susceptible to catching the swine flu; but the good news is that ferrets are not. Double phew. I wonder if gerbils are safe.

“Indoor pets that live in close proximity to someone who has been sick are at risk and it is wise to monitor their health to ensure they aren’t showing signs of illness,” said Dr. David Schmitt, state veterinarian for Iowa. Hmmm…rectal temperature, kitty?

Well, there you have it–just another day in the life of the swine flu hysterics. Meow.