Looks like T.V. doctors are influencing Americans in droves. Not surprising since people in the U.S. are generally obsessed with celebrity figures. Just look at internet search data and you’ll see celebrity searches topping the list day in and day out. True, things like the Paris Hilton sex tape or Erin Andrews nude video make up the majority of searches; but celebrities like Oprah, Howard Stern and George Clooney come in at a close second in search volume.

This is valuable information because it shows just what types of things influence American purchasing habits. Corporations have known this for years, so the celebrity endorsement is not a new phenomenon. But what is fairly young is the use of celebrities to sell health products. Pharmaceutical companies do it, for instance using Earvin “Magic” Johnson to sell HIV drugs. And companies pushing weight loss programs and products have also been aware of the super-selling power of celebrity.

But this brings up question: Should celebrities really be selling products that might be better endorsed by doctors? I mean, didn’t Tom Cruise take an s-load of heat for making statements about Brooke Shields and antidepressants? He’s just an actor! Well, marketers have found a solution: Use celebrity doctors!

That’s right, make doctors the new celebrity (reality celebrity-dom is in, baby). With shows like Dr. Phil, The Doctors, and now The Dr. Oz Show marketers have a powerful vehicle to sell everything from diet programs to the latest wonder drugs. Isn’t the evolution of business and advertising fascinating?

Take for instance the dietary meals on wheels program, Bistro MD. Not a new concept by any means, delivering meals of a certain calorie count for people to watch their weight, much like the calorie counting concept of Weight Watchers (a personal favorite of mine for its ground-breaking model conceived more than four decades ago). The idea, though, is for Bistro MD to take the work out of it for the customer. As their website says:

“take the hassle out of preparing healthy meals for the whole family.”

Sounds good to me. ‘Cept does work? Well The Doctors T.V. show is pushing it, so it must, right? Most Americans would think so cuz…those doctors are on T.V.!

How about a vegan diet? I used to think that was only for nutty hippies, but hey, Dr. Oz recommended a vegan diet for a meat-eating cowbow, so I guess like most Americans I’ll accept it cuz, well…that doctor is on T.V.!

And then there’s Dr. Phil. He’s called in Bistro MD on his show, too (see the video, here). That’s a double-whammy celebrity-doctor endorsement–now that’s advertising power! And so which company do you think is dominating health and weight loss web searches right now? Yes, Bistro MD. Very good, give yourself a gold star.

So what do I think about all this? Well, I’m really not all that influenced by celebrity endorsements (or so I think; but I do like Danica Patrick, hmmm…); therefore, I’ll have to stick to the truth as I know it: NO MAGIC BULLETS people! You want to lose weight, it takes three things:

So diets like Bistro MD alone ain’t gonna do it. Sorry. Gotta have above principles 1 and 3 in there, too. And, frankly, I find that anything that takes the hassle or work out of the process is a sure loser in my book, because it will violate principle number 1 for most people. Sure some people will succeed with Bistro MD, like it happens with most things, but in general, you gotta want it bad enough to make it happen. 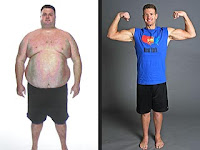 My favorite T.V. example of these weight-loss principles in action occurs in the show The Biggest Loser. They prove exactly what I’m saying: You’ve got to want it (#1), you’ve got to watch what and how much you eat (#2), and you’ve got to burn, baby, burn (#3). Ain’t no other way. But I’m not on T.V. so…who’s really listening?