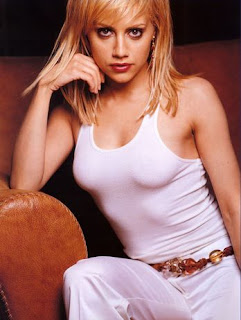 Actress Brittany Murphy was found dead this morning apparently suffering from full cardiac arrest. The 32-year-old actress was found unconscious in the shower at 8 am by her mom. TMZ reports that her husband, Simon Monjack, called 911 and when paramedics arrived they were unable to revive her with CPR. Murphy was taken to Cedars Sinai where she was pronounced dead.

Sad news as the another celebrity passes in 2009. Murphy was star of such films as “8 Mile,” “Clueless,” and “Don’t say a Word.” A few years ago, she released the single “Faster Kill Pussycat,” which became a dance club hit.

Murphy was young enough that this smells of narcotics overdose to me. I could be wrong but young ladies are not typically susceptible to cardiac arrest, unless there is an underlying cardiac abnormality. Given her life as an actress and singer, I hate to say it, but…well, we’ll see.

An investigation is being launched. We’ll keep you informed.

*Update: Rumor has it that she was fired from a recent movie, The Caller, for, “being difficult,” a charge her agent denies, insisting she left the project due to “creative differences”. Apparently early in her career, she was accused of having an eating disorder which some believed was tied to a cocaine habit.