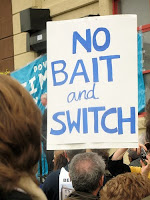 Ever hear of the ol’ bait and switch? That’s where a company advertises an amazing deal–let’s say top of the line laptop computers–and when customers come in looking for the item, they are told they’ve been sold out…we do, however, have these lesser brand laptops at a comparable price. Doh!

Well, bait and switch is exactly what I think of when I see the latest report on seasonal flu vaccine. According to the Center of Disease Control and Prevention (CDC), seasonal flu vaccine was doled out in record numbers this past season, with 40% of the population getting inoculated. Suckers! The jump was most dramatic in children but increased in healthy adults under 50 as well. 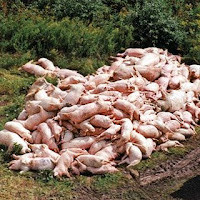 What led to this massive increase following a year (2008) of record low seasonal flu shot inoculations? Experts believe the jump was attributable to fears over the swine flu. Gary Euler, one of the authors of the study looking at last years flu vaccination numbers, said, “We do have a pandemic driving that.” Uh huh. No kidding.

Let’s see…what’s the best way to revamp a flaccid flu vaccination program? Let’s scare the s#!t out of the public with news of a “new” form of flu. Let’s remind them of former flu pandemics that claimed thousands of lives. Let’s show a real concern for the safety of people by recommending mass inoculations for the public. If it fails, at the very least a renewed vigor in seasonal flu might be stimulated. Hmmmm. 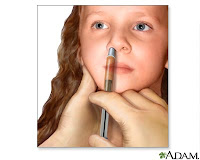 Now do I think there is some conspiracy of old white men sitting in their arctic fortress plotting world domination through dissemination of bio-warfare? No. But I do think it is too easy to overreact to a situation that is probably harmless. But how can you be sure? Because hordes of people get regular flu every year; they rest, drink fluids, moan and groan, and eventually get better–every year, without exception. I think inoculating for flu is necessary only under extreme circumstances. I believe it is much more important to build natural immunity, that way, we evolve along with the microorganism.

But there is certainly benefit to spreading panic–governments look like they care (there’ll be no Katrina for this administration), pharmaceutical companies turn massive profit, doctors/public health officials are needed, and other waning fears get a recycle. With that much to gain in spreading fear, why wouldn’t several groups participate, even if unintentionally?

Why it matters is because this type of sickness/fear agenda is precisely what is wrong with the health paradigm in the western world. Pushing the notion that we need outside elements–drugs, vaccinations, the government–to experience health and well being, and not our own Innate Intelligence, is absurd. And using tactics like fear, or bait and switch, doesn’t muster any more trust in Big Brother for me.

At least this is how I feel with regard to flu and swine flu. Come the day we see swine malaria…well, maybe then I’ll be a little scared.