Sleeping With Pets Can Be Infectious

Listen up pet lovers: Sleeping with the dog or cat might be hazardous to your health.  That’s right–the midnight snuggle with Max-the-mutt just might cause you to get sick; so says a recent report being published in the upcoming issue of the public health journal Emerging Infectious Diseases.

According to the report, domestic animals can carry a number of microorganisms like bacteria, parasites and viruses.  Yuck!  And these infectious agents can cause anything from mild to life-threatening illnesses.  Double yuck!

Two hundred and fifty zoonotic diseases that can be spread from animals to humans are known, and of those, more than 100 can be transmitted by domestic pets.  Although the risks are low compared to the numbers of people that sleep with their pets, scientists and veterinarians just want you to know the risks are still there.

“Having a pet in the bed is not a good idea,” Bruno Chomel, report co-author and professor of zoonoses at University of California School of Veterinary Medicine at Davis said. 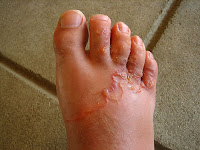 As I said earlier, the spectrum of diseases transmitted from pets to owners varies, but some of the more common ones are hookworm, ringworm, roundworm, cat scratch disease and drug-resistant staph infections, the report said.  One of the cases referred to was of a 69-year-old man who caught meningitis from his dog licking his hip-replacement wound all night as they laid in bed.  Puke-bucket, anyone?

Especially at risk are people with weakened immune systems—children under 5, the elderly, HIV+, cancer patients–but everybody can decrease their risk of catching zoonotic diseases by practicing a few good hygiene habits: 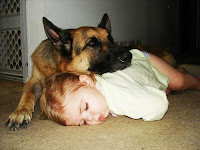 Because most zoonotic infections are under-diagnosed or not reportable to health authorities, no one really knows how many cases occur each year.  One expert, Dr. Peter Rabinowitz of the Yale School of Medicine, believes the numbers are in the millions.  He says, “We think there are probably a lot of infections that happen and nobody really figures out that it came from the pet.”

Before anybody gets all up in arms about this report (I know you pet-lovers…), consider this: Sleeping with Killer might be just as risky to his health as it is for yours.  Last year, a cat in Iowa was reported to have contracted H1N1 (swine flu) from his owner.  Unfortunately, pets don’t have their infectious disease reporting down yet–so for now they suffer in silence.