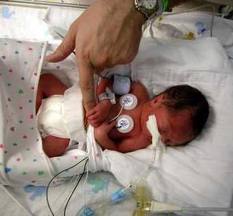 Used to be a time when preventing premature births was affordable–$10-$20 a week.  Not anymore.  As of next week, the cost of the synthetic progesterone drug, Makena, used to help high-risk pregnant women from delivering preemies (babies born earlier than 37 months), will shoot up to $1,500 a pop!  So much for socialized health care.

Makena, a progesterone synthetic, has been made cheaply for years, mixed in special pharmacies that custom-compound treatments that are not federally approved.  The federal government, however, has approved a suburban St.Louis drug maker, KV Pharmaceutical, to be the sole producer and profiteer of the drug.  Can you say, “Cha-ching!”?

Why on earth, you may be asking.  Proponents (March of Dimes and many obstetricians) of the exclusivity rights for Makena production believe that, by limiting manufacturing to one company, quality and availability of the progesterone drug will increase.

But not even they could have anticipated the enormous price hike, especially since the cost for development and research was taken up by others in the past.

“That’s a huge increase for something that can’t be costing them that much to make. For crying out loud, this is about making money,” said Dr. Roger Snow, deputy medical director for Massachusetts’ Medicaid program.

“I’ve never seen anything as outrageous as this,” said Dr. Arnold Cohen, an obstetrician at Albert Einstein Medical Center in Philadelphia.

A KV subsidiary, Ther-Rx Corp., will market the drug. On Tuesday, it announced a patient assistance program designed to help uninsured and low-income women get the drug at little or no cost.

OK, that’s nice…but what about those forced to purchase health insurance under the Obamacare mandate…and how about the middle class?  Well their insurance will have to pay for it…duh!

So, for many, as the cost to treat one high-risk pregnant woman goes up to nearly $30K, they will likely be offset by increased premiums and other costs (higher deductibles and co-pays, you know the story).  One insurer, Aetna, will continue to pay for the drug, but the price tag will be high.  The insurer currently covers synthetic progesterone for about 1,000 women a year, so the new federal endorsement will cost an estimated $30 million more annually.

And some will go through their state’s Medicaid programs, many of which are broke.  “There’s no question they can’t afford this,” said Matt Salo, executive director of the National Association of Medicaid Directors.

A 2003 study showed progesterone helped prevent early births in women who had a history of spontaneous preterm deliveries. Preterm babies, or preemies, need months of intensive care and often suffer disabilities, if they survive.  The cost of care for a preemie is estimated at $51,000 in the first year alone.

No one knows what causes some women to deliver prematurely, but there is a higher prevalence in black mothers as compared to whites or Hispanics.  Some experts believe that the progesterone drugs help relax the muscles of the uterus, thus delaying premature delivery.

Well, all I can say is…I told you so.  Frickin’ duh!  What did you think socialized health care was going to do, create a health care utopia?  Dream on.  It will remove competition through mandates, exclusivity, palm-greasing and good ol’ fashioned rear-poking.  Unless, of course, the government chooses to step in and set prices (which the FDA cannot currently do).

Last month, however, KV sent cease-and-desist letters to compounding pharmacies, telling them they could face FDA enforcement actions if they kept making the drug.  Oh well, government favors do go a long way.