No Mistakes in the Matrix: Book Review for Counterpoint to Reality The Art of Human Interaction 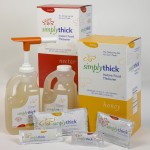 Listen up parents, particularly parents of preemies: if you’ve been giving your infant Simply Thick to help with swallowing, be warned that the product could increase their risk of developing a life-threatening illness. The FDA has issued a warning that 22 infants developed necrotizing enterocolitis (NEC) after being fed baby formula or breast milk mixed with Simply Thick. Seven of them died.

The product is used for children that have difficulty swallowing (dysphagia), and although a direct link to NEC has not been yet confirmed, authorities do want to put parents, caregivers and healthcare practitioners on high-alert.

NEC is generally seen in premature infants where portions of the intestinal tissue goes through necrosis or tissue death. The FDA, however, has extended the warnings to all infants being fed the formula thickener. And parents should be on the lookout for NEC symptoms, which include a bloated stomach, greenish vomit, bloody stools and lack of interest in feeding. 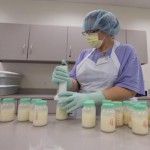 According to Dr. Ari Brown, a pediatrician Austin, Texas, and co-author of Baby 411, if reflux and spitting up continues to be an issue, parents do have other options. “They can try doing smaller, more frequent feedings; keeping infants upright for at least 20 minutes after eating; and placing them at a 30 percent incline for sleeping,” she said. “In severe cases, your pediatrician may prescribe medication to help treat.”

And to ease some worries, Dr. Brown adds, “If you’ve already stopped using the product for a while and your baby seems fine, there’s no need to worry.”

Just some food for thought here, but Formula feeding increases the risk of NEC by tenfold compared to infants who are fed breastmilk alone. Breast milk protects the premature infant not only by its antiinfective effect and its immunoglobulin agents but also from its rapid digestion. For women that do not produce breastmilk, human milk from a milk bank or donor can be used. I am a big proponent of using human milk over formula, and this latest news is just another reason why. Am I implicating Simply Thick before all the information is in? No, just stating my belief that the human body knows better than man’s educated, and often arrogant mind. Again, just food for thought. Be safe.