What The Heck’s Going On Here? Bottled Water Ripoff

Anorexia Is Not Just For Kids Anymore 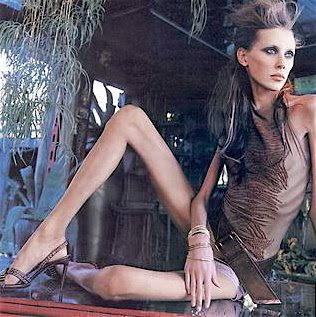 Experts say that the number of women in their 30s, 40s and 50s being treated for anorexia is rising fast. One eating disorders treatment center in Minnesota says that its number of mature patients has increased from 9% in 2003 to 35% through only the first half of this year.

According to Carol Tappen, director of operations for the Park Nicollet Health Services’ Eating Disorders Institute in St. Louis Park, Minn., women over 30 are dealing with body image issues and more, such as work, divorce, stepchildren and aging parents. They also are dealing with an aging process, or childbirth, that changes the way they look. Tappen says, “One day, (a woman) wakes up and the kids are gone and she has a sense that nobody really needs her. She looks in the mirror and she says, ‘My body is shot.’ This woman says, ‘You know, that’s it. I’m going on a diet.’”

This really is a complex issue with no easy answers. At the risk of stating the obvious, this is a serious self image issue with deep rooted beliefs on what makes a person worthwhile or desirable. Being healthy is one thing, and yes, your body can give you an accurate picture of your current level of health, but skinny does not equal healthy. Far too many people (both men and women) use their weight as a guide to their health – that’s their reference point.

If you wake up one morning, look at your body and say, “I gotta make some changes.” Great, make changes. Start exercising, eat healthy foods, see a chiropractor and get that neck ache squared away, but don’t starve yourself. First off, it’s counterproductive: You’ll actually end up looking worse – it’s not attractive. And secondly, it is so damaging to your health. What difference does it make at the end of the day if you’re skinny but you drop dead because of the stresses you’ve put on your body?

I can’t speak for every man (or woman – this is not a heterosexual thing) but I’m pretty certain that most men find self confidence and self comfortability more attractive than skinniness. Unfortunately, I think that society is inundated with images of ultra-thin fashion models and celebrities and begins to think it’s normal. It’s not! Maybe a few of those images reflect the normal body shapes of some particular celebs, but many of these women are anorexic too.

Some women will say, “I don’t need to lose weight for anybody but myself – I feel better when I’m thinner.” Really? Somehow, I just don’t buy it. A fine line sits between being over and under weight, but as I’ve said before, weight is simply a poor way to evaluate one’s health. Do the right things, practice the six keys to optimal health, and if you don’t look and feel great, you just haven’t given it enough time. Remember one thing: nobody is rejecting you because of your weight – it might be a lot of things, but it ain’t that. And if for any odd reason it is, then that person isn’t worth a pound of….

One Response to Anorexia Is Not Just For Kids Anymore