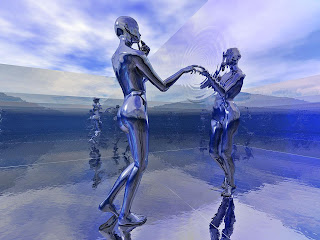 Here’s a tripper: Japanese scientists have discovered that recovery from stroke is faster when using a mirror to create the illusion that paralyzed limbs move in tandem with healthy ones. Just another study showing the incredible healing power of the mind.

Stroke causes hemiplegia–a condition where one side of the body becomes paralyzed–one of the more serious complications of this dreaded brain injury. Rehabilitation of hemiplegia is especially tricky, and regaining full use of the paralyzed half isn’t always successful.

But now with mirrors the rehab has gotten easier. What researchers did was place a mirror on the side of the stroke patient’s body. As the patient moved his or her healthy arm, it appeared that the paralyzed arm was also moving due to the impression in the mirror. This bilateral image of limb movement, the researchers found, actually tricks the brain into believing that there is normal motion. Apparently this visual imagery is necessary to create and maintain neural motor function, the ability to move.

This is simply fascinating to me. If the visual imagery caused by mirror trickery works on a neurological level, then what are the implications for other types of healing? And why would it only apply to mirrors? Wouldn’t simply visualizing healing processes also work? What does this mean for cancer patients? Or AIDS patients? Or people with high blood pressure? I mean, can’t we extrapolate these findings to other healing mechanisms? Well, we don’t know yet. But my guess is that adding visualization to any treatment or therapy–be it chemo or drugs–should do wonders to help the healing along.

As Kazu Amimoto, one of the study’s authors said, “The mental aspect of rehabilitation has far greater importance than previously understood and should be paid far more attention.” Indeed, Kazu–I think it’s coming.

One Response to It’s Done With Mirrors