More on Vegetarianism The Importance of Core 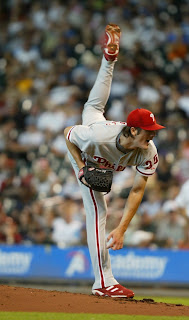 Philadelphia Phillies pitcher and World Series MVP, Cole Hamels, has been using chiropractic since 2005. He originally went to see a chiropractor for low back pain that had been plaguing him since high school. Hamels has also used chiropractic to relieve him of an elbow injury that disrupted his 2007 season.

Says Hamels, “I felt a difference right off the bat. A lot better than my physical therapy and the prescription drugs the doctors were giving me.” Hey, that’s a progressively-minded young man. Hamels also does yoga, spins (bike-riding), and has a supplement tray in the locker room filled with vitamins and fish oils. Nice.

Also speaking out for chiropractic is NFL legend and former San Francisco 49er, Jerry Rice. Rice was named the national spokesman for chiropractic by The Foundation for Chiropractic Progress (F4CP); he has been featured in full-page advertisements in ESPN the Magazine with positive statements on how chiropractic helped him become one of the greatest receivers in the game. According to the F4CP, Rice’s ESPN ad is the beginning of a comprehensive public relations effort for the chiropractic profession.

Booyah! See the video below to hear Rice’s words on how chiropractic helped him. Rice also talks about chiropractic’s role in his success on Dancing With The Stars.

Thank you Cole Hamels and thank you Jerry Rice. As more and more athletes step up and tout the miraculous benefits of safe, effective chiropractic care, the more the general public will feel inclined to try it. And the better off we’ll all be.