Chocolate Stress Cure Thanks for Getting On-Board 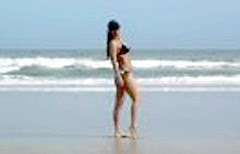 A Canadian woman on long-term sick leave for depression says she lost her benefits because of pictures posted on Facebook.

According to a recent report from the Canadian Broadcasting Corporation, Nathalie Blanchard of Quebec has been on leave from her job at IBM for the last year. She had been receiving monthly payments from insurance giant Manulife, but the payments dried up this fall. Apparently, according to Ms. Blanchard anyway, she was told she lost benefits because of pictures posted on Facebook showing her having a good time at various activities, including a night out at a Chippendales bar show club.

Manulife denies that they would drop coverage solely based on information published on Web sites such as Facebook. However, they did say that they have evidence that Blanchard is no longer depressed. Hmmm. Blanchard states that she went partying on her doctor’s advice to go out and have a good time to help her forget her problems. Double hmmm….

Well I guess if it does, then there will always be a fine line that insurance adjusters will monitor. Just like with physical disability, an insured collecting monthly payments will have their life scrutinized. Who hasn’t heard of people on permanent disability filmed lifting heavy objects, doing housework and other activities proving that they can, in fact, work? Duh! Same thing will happen with mental health issues.

Can’t say whether Facebook pictures of somebody enjoying Chippendales dancers constitutes improved mental status (could argue either way), but remember it’s a fine line. It seems to me that if you are too depressed to work, you are probably too depressed to go out socializing. Or put another way, if you can find joy and purpose in male strippers, or anything for that matter, getting your behind to work will probably good for you in the long run.