Depressed Canadian Loses Benefits over Facebook Let it Out!

Thanks for Getting On-Board

In 1992 when I was in college, the Catholic Church finally acknowledged Galileo’s findings on planetary motion, and publicly cleared him of any wrongdoing. Evolution is still foolishly rejected by some. But what really makes me feel good is when an idea known as true for so long by some gets picked up by the mainstream.

Take pain for instance; chiropractors have known for over a century how wide ranging its effects are. But not the medical industry. Noooo. Pain is a part of getting old. There are some medications we can give you to ward off the pain, but…I’m sorry Missus Jones, you’ll just have to live with the pain. 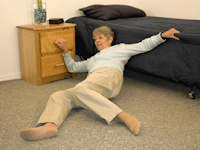 But, as they say, the times they are a changin’. And there is now acknowledgment that pain can wreak havoc on human operation that goes well beyond the obvious. A new study out of the Beth Israel Deaconess Medical Center in Boston and the University of Massachusetts shows that chronic pain actually increases the probability of seniors falling. Since falls are a significant cause of death for the elderly, uncovering its predisposing factors are vital.

According to the study, published in the Nov. 25 issue of the Journal of the American Medical Association, people who had pain in more than one joint were more likely to fall, compared with people who reported no pain or minimal pain. Severe pain and pain that affected participants’ ability to do daily activities also made falls more likely, researchers found. In addition, having pain in one month made falling in the next month likely. People who reported severe pain in one month had a 77 percent increased risk of falling the next month. Even people reporting very mild pain were more likely to fall the following month, the group found.

So this is nothing new to chiropractors. We know precisely how much pain interupts neurological functioning of the human body; we know that the elderly are particularly susceptible to pain-induced biomechanical dysfunction (but don’t get false security young-folk, you, too, are susceptible); and we know that helping people become pain-free through chiropractic care helps them maintain their function, their balance and their dignity.

But here’s the problem: Medical science does not fully recognize it, yet. Damn shame I tell you. The current medical answer to pain in the elderly is pharmaceutical therapy, or in other words, drugs. Not only is this solution a non-solution since it never really removes or corrects the pain, but it can also add to the feelings of imbalance which then lead to further…you guessed it, falls.

Did the researchers mention pain-relieving chiropractic care as an answer? Well, they did mention fitness and wellness professionals, and since chiropractors are that, then…I guess they did. Thank you, thank you medical science–it’s about time. Like Galileo before him, D.D. Palmer will appreciate the acknowledgment.