Chiropractic in the NFL Baby Boomers Riddled with Disability

When All You Have is a Hammer…

Well no doubt that all this talk about health care reform has brought some long overdue can-o-worm opening. Take, for instance, unnecessary surgeries: a medical nuisance of the worst magnitude, and common practice for decades. A recent report discloses that riskier surgeries for low back pain have risen in number and in cost, yet many are unwarranted. Well n-o-o-o chit! You know what they say, “When all you have is a hammer, everything looks like a nail.” 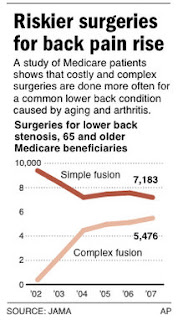 Data on more than 32,000 Medicare patients with low back pain stemming from spinal stenosis (a narrowing of the spinal canal causing a squeezing low back pressure) showed that costlier, more complex spinal fusion surgeries were recommended and performed over a six year period. Less expensive decompression surgeries, costing roughly $20K, were often bypassed for $60-90K spinal fusions, despite the more expensive surgeries having greater complications and even leading to death.

Worse yet, many a spinal fusion was lacking in evidence for appropriateness of care. You don’t say? Our doctors doing the unnecessary? Nah, not McReamy. You bet your assets they are. And I love it, because we chiropractors have known about it for years, and we haven’t been quiet about it, either. We have tried to sway the public toward more natural and highly effective treatment options, but noooo, stay away from them chiropractors, they can hurt you.

Yeah? Listen to these number: 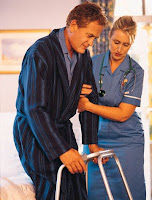 According to the study, more than half the patients who had complex fusions had a simple stenosis, which usually calls for decompression alone. Rates of complex fusions in Medicare patients rose 15-fold from 2002-2007, while decompressions declined, and hospital charges grew 40 percent. There have been allegations of kickbacks to spine surgeons for using products of a particular hardware manufacturer. Hey Izzy, them screws you got in ya back sent me and the missus to Reno…

Listen, I don’t really think there’s some big conspiracy here: It ain’t rocket science. The medicos are admittedly deficient in their training in treating musculoskeletal issues. Surgery is also notoriously ineffective at relieving low back pain for any significant stretch of time. So why are drugs (equally ineffective) and surgery still the treatments of choice by the cultural health authority? Simple. When all you have is a hammer…