Wait a second…what was I just saying?  Whoa–what was I just thinking?  Probably everybody reading this has had the experience, that moment when you forgot what you were saying just moments before.  It’s called a brain cramp, and new research suggests that it may actually be a brain nap!

When we get sleep deprived, some nerve cells can actually shut off, going into a sleep-like state although the brain as a whole is awake.  I reported on this phenomenon last year, but think it’s important enough to look at again.  This shutting off of the brain was thought to be responsible for falling asleep at the wheel, too. 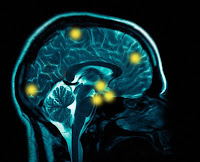 There was a time when neuroscientists believed that the entire brain was affected by sleep deprivation, as EEGs typically showed brain-wave patterns of either being asleep or awake.  But in a recent experiment scientists placed probes into the brains of rats, and after depriving the rats of sleep, saw areas of ‘local sleep’ despite the animals’ appearance of being awake and active.

There were consequences: The sleep deprived rats made mistakes when challenged to perform certain tasks like picking up sugar pellets (pellets were dropped).  In one experiment 20 neurons were monitored; while 18 stayed awake, two timed-out.

Researchers point out that the brain shows sleep-like activity even before micro-sleep sets in.  So for people falling asleep at the wheel, very likely had neurons shutting off well before the snooze.

Once again, I believe this information is important.  Sleep is essential for proper functioning of the mind AND body, but now we know that even slight sleep deprivation can compromise health, and survival.  So be smart–get as much rest as you can–your life (or somebody else’s) depends on it.