Parents, here’s one to think about: More than 5,000 U.S. children and teens are injured every year in falls from windows; but the problem isn’t confined to high-rises–most falls are from the first or second story.  Something to think about before airing out that unattended room by opening the windows.

According to a recent study published this week in the journal Pediatrics, preschoolers are the most at-risk from falling out of windows, and they also suffer the most head injuries. “Two-thirds of these injuries occurred among children younger than 5. This is the age group that’s mobile, curious and does not recognize the danger of falling from a window,” said senior author Dr. Gary Smith of Nationwide Children’s Hospital in Columbus, Ohio.  Fewer than 1% of these cases led to deaths, but the researchers said the tally likely underestimated fatalities because not all children who die from their injuries are brought to the hospital. 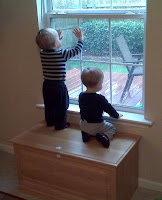 Parents don’t realize how easily children can climb up to windowsills by using toys or furniture as a boost.  And screens may appear as sturdy objects to little ones who don’t know any better.  A fall to the pavement below sure is tough way to learn that lesson.

The good news is that very few are fatal, but head injuries are common, so taking precautions is the best practice.  Window guards that run between $20-$40 can be installed, as can bars.  Window guards have a quick release that allows escape from a fire or other emergency.  No doubt, they’re ugly–but better ugly than Humpty Dumpty.  We have window locks in our place that allow us to keep the windows cracked, but prevent a child from slipping through–godsend for people that love fresh air.

Just think, 5,000 children per year dropping out of 1-2 story windows–that’s 100 per state!  That means the odds of yours being one ain’t that small.  Take precautions and prevent pediatric window diving…especially if you live in Wyoming.