Prescription Drug Deaths Up and Climbing Just the Meat Please

Here goes an exciting story, a symbiosis of human mind and computer, to solve a decade-long problem in the molecular structure of a key enzyme in an AIDS-like virus.  The feat was carried out by gamers playing an online game called Foldit, where groups compete to unfold chains of amino acids–the building blocks of proteins–using a set of online tools.  It is believed that this is the first time gamers have resolved a long-standing scientific problem.

Online gamers cracked the structural code of a retroviral monomeric protease enzyme, a cutting agent in the complex molecular tailoring of retroviruses, a family that includes HIV.  The game is a 3-D picture that “unfolds” the molecule and rotates it in order to reveal potential targets for drugs.  Looking at proteins through a microscope provides only a flat image of what looks like (to the untrained eye) a plate of one-dimensional scrunched-up spaghetti.

Understanding protein structure is important in understanding enzymatic function, substrate and environment to lead to strategies for combating viruses and other microorganisms.   Pharmacologists use structural information to devise drugs.

Foldit was developed in 2008 by the University of Washington.  “We wanted to see if human intuition could succeed where automated methods had failed,” Firas Khatib of the university’s biochemistry lab said in a press release.

“The ingenuity of game players is a formidable force that, if properly directed, can be used to solve a wide range of scientific problems.” 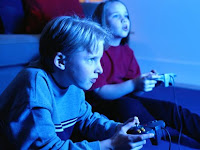 One of Foldit’s creators, Seth Cooper, explained why gamers had succeeded where computers had failed.
“People have spatial reasoning skills, something computers are not yet good at.  Games provide a framework for bringing together the strengths of computers and humans,” he said.
I love this latest breakthrough, not just because I am a molecular biologist by training, but because I am certain that man and computer will continue to evolve together in greater hybridization to the benefit of both in the near future.  This is simply one example of what will be accomplished from that symbiosis.  Bravo to online gamers!  And this should be food for thought to those that think video gaming is useless.  As I’ve contended repeatedly in this blog, all human interests have value, and we never know how our underappreciated skills will serve humanity in the future.