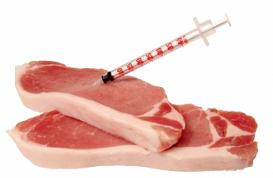 Limiting the use of antibiotics in animal husbandry is suggested to reduce the risk of developing and transmitting resistant microbes to humans.  Antibiotic resistant bacteria, like Methicillin-resistant Staph aureus (MRSA), are believed to be transmissible to humans via farm animals, particularly pigs.  The mode of transmission can include meat consumption, being in close contact with the animals, or through the environment (groundwater contamination). 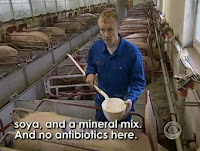 The European Union has already banned most antibiotics in animal feeds (with the exception of two in poultry feeds) since 2006, and Scandinavian studies have shown that restrictions have led to a decrease in resistant animal bacterial populations.

MRSA is not the only drug-resistant bacteria on the rise in animal products, either.  Bacteria resistant to fluoroquinolones and the most recent generations of cephalosporins have become more common.  Both these classes of drugs are considered essential to human health as a last line of defense to combat the most stubborn infections.  Resistance to third and fourth generation cephalosporins in Salmonella Heidelberg infections in humans has been increasing over the last several years.

According to Beth Karp, senior veterinary epidemiologist with the US Centers for Disease Control and Prevention, “Between 2008 and 2010 resistance increased from 8 percent to 24 percent. In retail chickens isolates, resistance in Salmonella Heidelberg increase from 17 percent in 2008 to 31 percent in 2009.”
The strain is resistant to nearly all antibiotics.

We are well beyond a wake-up call here.  Antibiotic resistant bacteria is no joke, as we have seen what it can do during mass outbreaks like in 2007-2008.  More and more meat products are contaminated with these super-bugs, and with further neglect, it’ll only be a matter of time before we see another one (fluoroquinilone-resistant campylobacter is common in the U.S. in poultry products).
Again I say bravo to the WHO for taking a stand, as well as the USFDA for listening to consumers and passing on their recommendations to the meat growers industry.  As for meat manufacturers, I hope you are listening.  I get wanting to provide product that’s beefier and all-around more aesthetically pleasing, but your current practices are a powder-keg waiting to explode.  Hopefully you’ll discontinue the practice of pumping-up livestock with antibiotics, hormones or anything else that you might be adding.  Just the meat, please–the people have spoken.

One Response to Just the Meat Please