Kids Bigger by the Decade

Just to show you how bad the childhood obesity numbers are getting, a recent study highlighted the problem among our nation’s kindergartners. Research conducted by the RAND corporation showed that today’s children are heavier than their counterparts of the 1970s and 1980s, and that these children run a real risk of becoming obese as adults.

The researchers analyzed data on nearly 6,000 white, black and Hispanic children who participated in the Early Childhood Longitudinal Study–a nationally representative sample–and had their height and weight measured over nine years, in kindergarten, first, third, fifth and eighth grades. They found that nearly 40% of kindergartners had a BMI in the 75th percentile, which means that they are heavier than 75% of their peers. This number is up from 25% in the 1970s and 1980s, when the growth charts were developed by the U.S. Centers for Disease Control and Prevention.

Although the 75th percentile is not by any means overweight or obese, it does show that, in general, children are getting bigger. Overweight (85th-95th percentile) and obese (>95th percentile) numbers for children did increase as well, however, to 28% and 12% respectively, up from 10% and 5% in each category. The largest gains were seen in Hispanic children and black girls. 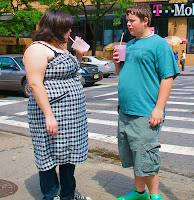 Experts are unsure of the reasons for these findings but believe that readily available and convenient high-fat, high-sugar and highly caloric snack and processed foods, and less physical activity due video games, TV and less outdoor play time are all potential contributors.

The significance of these findings are not only that the number of overweight and obese children is on the climb, but that a large portion of children are on their way to blowing up, as signified by the high numbers in the 75th percentile. Without a doubt, overweight and obese children should be attended to, but a real danger lurks with these potential bigger kids, those in the 75th percentile, and the direction they might go as they grow.

Less children were on the lower weight end, too–about 14% were in the lowest fourth for weight compared with 25% in earlier generations and 18% were in the second lower quartile compared with 25% in earlier generations. While having some pluses, primarily less underweight and malnourished children, it merely shows how society, as a whole, is blowing up.

I still contend that these numbers are due to the types of foods Americans eat regularly. Processed foods, in my opinion, are the worst, since they are sold a wholesome foods in supermarkets and grocery stores. But too many are relying on fast foods, which is just hamburger joints, but delis, pizza, bagel shops, taco stands, and the list goes on and on. If it’s not whole, natural foods and you are not preparing them at home, then it’s fast food, period. Not good for the health, and certainly not good for the waistline.

Parents you have a responsibility to feed your tykes good food. They will eat junk food on their own–no need to have it around the house. And frozen, canned and packaged food isn’t any better, no matter what the label says. If you ain’t cooking it–it’s crap. Nuff said.