Chiropractic for Migraines: A Good Bet Kids Bigger by the Decade 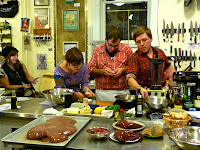 Bravo to the younger generation! Millennials have got it right—they’re cooking at home. And if you don’t know how I feel about that, then you haven’t been listening. The most predominant dietary advice I give is to eat whole, natural foods; and in that vein, you’re much better off preparing those foods at home than eating at a restaurant.

According to a survey conducted by Mintel, a market research company, home cooking has become increasingly popular among younger generations. The survey polled 2,000 adults over the age of 18 and found that 25% of respondents between the ages 18-34 said they “love cooking,” while only 17% of seniors and Baby Boomers said the same.

The survey also found that 51% of respondents eat at home primarily for dietary reasons, as “homemade meals tend to be healthier than restaurant fare and prepared grocery foods.” Nice!

Looks like the younger generation are doing thing the right way for the right reasons. I love it. What it means, I hope, is that this practice will be passed down to even younger generations. Millennials seem to be aware of the downside to the fast food revolution of their parents era, and they are smart enough to connect the poor-health dots. Once again  I say bravo to the younger generation: They’ve got it right when it comes to how they eat. Keep up the sage practice, kids—the rewards it has to offer are bountiful.

One Response to Younger Generation Eating at Home