Scent Might Signify Illness Vitamin D Testing Determines “How Much?”

It’s baaaack…swine flu, baby. But will it be with a vengeance? A current report lists the number of dead in Mexico due to an outbreak of A(H1N1) swine flu at 9, with 573 cases being detected officials said Sunday. The strain represents 90% of the flu cases in the, country, according to the health ministry. 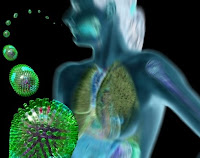 Officials state that the number has risen sharply from the 333 detected on Thursday, but Mexican authorities have brushed aside suggestions of a new health emergency, despite tracking new cases since December. More than 1,250 people died in Mexico (and 17,000 worldwide) in 2009 due to the H1N1 pandemic of that year.

Outside of Mexico, there doesn’t seem to be much to worry about at the moment. If you recall in 2009 U.S. health authorities attempt to create a big scare, and consequent mass inoculation against the H1N1, and what a fiasco that turned out to be.

I’m not saying that a swine flu outbreak can’t be a real danger to the modern world, but it didn’t turn out that way in ’09, not as far as the potential hysteria could have been, and it doesn’t look like it will now. But I’ll keep my eyes open for ya. Till then–stay calm everybody!