I would love to share some interesting, if not telling, “health” statistics with you. Remember from an earlier post that most people in western society use the term health care to describe medical care, but I’ll let you decide how to define things. A big thank you to Don Petersen and Dynamic Chiropractic for alerting me to these numbers.
According to the Centers for Disease Control and Prevention, National Center for Health Statistics study published in September 2011, the percentage of Americans on prescription drugs in a given month has risen from 39.1 percent (1988-94) to 47.2 percent (2005-08). So nearly half of all Americans are on at least one prescription drug! 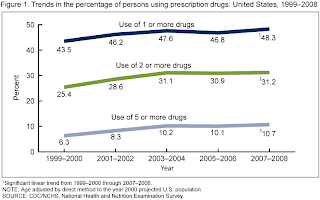 But wait! It gets better. In the U.S. as of 2008 (you can assume the numbers are even higher today), in any given month:

Nice! And which drugs are Americans popping like Pez?

But wait! It gets better. As Don Petersen points out in his article,

“Common over-the-counter drugs like acetaminophen (paracetamol) have been found to increase the risk of asthma, rhinoconjunctivitis and eczema in children. Nonsteroidal anti-inflammatory drugs are associated with erectile dysfunction. Early antibiotic use increases the risk of asthma and allergies in children. Antidepressants are associated with an increased risk of stroke. For children and adolescents, 90 percent of office visits are ‘associated with unapproved usage of antidepressant medication.’

A couple of thoughts before directing you to Don Petersen’s Dynamic Chiropractic video explaining these recent findings. First, let me address the bright side: There are still ~10% of older Americans  (ages 65 and older) on NO drugs! That’s a darn-near miracle considering the massive pressure older people are on to take medications from their doctors, the mass media propaganda, and the inevitable aches, pains and illnesses they encounter (like we all do).

Second, although about half of all Americans are on one medication or another, half are not. Yes, I believe that medications are useful and necessary under certain circumstances, but these numbers tell me that either Americans are sicker than ever before in history (a distinct possibility considering the foods they routinely eat, the amount of soda they ingest, and how many drugs they currently take), OR they are just so indoctrinated by the the medical “health” paradigm that to the American psyche this is health.

In any case, 50% of all Americans are drug free in any given month, so they are experiencing, and hopefully, caring for their health. I guess in today’s pharmaceutical climate that’s something to be grateful for. Watch the video below to get more of an understanding on the current medication stats–forgive me, health stats–for Americans in 2012.