“Monthly injections of an experimental drug from Amgen Inc slashed levels of cholesterol by up to an additional 66 percent in patients already taking statins, researchers said on Sunday, making it a potential strong rival to a similar drug being developed by Regeneron Pharmaceuticals Inc.”

That’s right, millions of you reading this will be taking this drug in the very near future. Or maybe it’s 2022, and you’ve been taking the drug for the last few years. Either way, AMG 145 will be the newest wave in the medical industry’s fight against cholesterol. 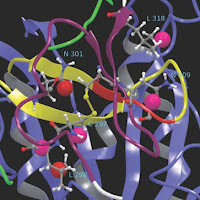 The early phase 1 trial was conducted to test the safety of AMG 145. Researchers followed 51 patients who received a shot either once every two or four weeks. They found that some subjects, those already taking high dose statins (popular prescription cholesterol lowering drug), had an average of 63% reduction of their LDL levels. And those on a low dose statin regimen fared even better, with an average 66% reduction of LDLs.

Manufacturer Amgen is rather pleased with the results, and why not? A drug of this magnitude has the promise of dominating a market for ten plus years. I am certain that medical doctors, administrators, federal overseers and the mass medical marketing machine are also ecstatic, as this can darn-near guarantee a “good” decade for medical business interests. Industry analysts says PCSK9 inhibitors, if approved, could generate annual sales approaching $20 billion.

Although insiders caution that bigger trial are needed, they do hope a technicality can get AMG 145 through the U.S. Food and Drug Administration (FDA) hoops and approved for sale. A big question remaining is whether U.S. regulators would approve the drugs without first requiring major studies that evaluate long-term heart attack and stroke risk.

“That’s the subtle wrinkle here,” said Steven Nissen, head of cardiology at the Cleveland Clinic. He speculates that the FDA might be willing to approve them without such costly outcomes trials because statins were approved without them on the basis of their ability to lower cholesterol. Nice to know.

Because both statins and the PCSK9 inhibitors, although different classes of medicines, exert their influence on the LDL receptor–a protein that carries LDL cholesterol through the bloodstream–Nissen thinks that it might be enough to construe a similarity argument, getting it passed through the FDA without necessitating additional testing. Just another day at the office for Big Pharma.

Well, I go back to my original point–be prepared for indoctrination into the newest era of bad cholesterol eradication. The PCSK9 inhibitors are here to stay. Watch them take the world by storm as the new medical blockbuster, all but cementing medicine’s dominance on the health care market. Coming to doctor’s office near you. Ten more years, ten more years…