Bedbug Infestation at the Office? 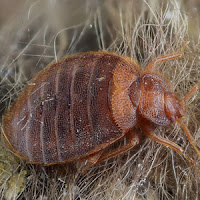 When it comes to bedbugs, “I gave at the office,” has a lot more meaning. That’s because recent reports tell of the little blood-suckers invading our workplaces. Yikes! Call in the German shepherds!

German shepherds?! Achtung baby…that’s precisely what they’re using in Tennessee: bedbug-sniffing German shepherds. Their findings? A 2011 a survey of U.S. pest control centers found that 38% had responded to infestations at office buildings–up from 17% the year before. Ewwww…. And treatments at schools and day-care centers rose to 36% from 10%, with visits to hospitals jumping from 12% of their jobs to almost one-third. Please get this: Hospitals are now some of pest control centers’ best clients.

For those that don’t know, bedbugs are fairly benign blood suckers–that is, they bite people, leaving welts itching and swelling. But they do not carry disease like some other insects. Saying that, they are more than just a little annoying as they can do a number on the poor victim.

In Tennessee, where it was uncertain as to what was causing mince-meat out of office workers, the special-unit canines, trained to sniff out bedbugs, were brought in and the verdict was conclusive: Bona fide Yecccccchhhh! 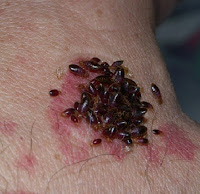 And if you need a bedbug-sniffing German shepherd to confirm your suspicions…well by golly git one. Oh…and just know that bedbugs love sucking on animals too, so hopefully Schultz doesn’t bring any into the house nestled in his coat. Well, that’s all–itch away.