Whatever You See, There You Are

By Dr. Nick Campos On June 8, 2012 · 4 Comments · In Mind
Reflective
I found a
weed
that had a
mirror in it
and that
mirror
looked in at
a mirror
in
me that
had a
weed in it ~ A.R. Ammons 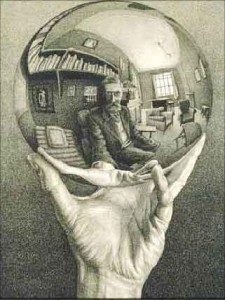 You can’t escape yourself, have you heard? I’ve tried plenty of times, only to find that I was still lingering after the dust, or smoke, or booze had settled. Whatever we see in the world, whatever we perceive about others, is just that…a perception. It doesn’t really capture the true essence of a thing, unless you see all sides to that thing.

So people have all character traits, whether we like them or not. Just because we have the tendency to see others as one-sided doesn’t make it so. Everybody has everything—mean, nice, selfish, selfless, ego-centered and altruistic—nothing is missing. But when we judge another person—and it doesn’t matter if we are resenting them, or placing them on a pedestal—we are really just seeing them through our own perceptions.

Perception is an interesting thing, as it reflects our beliefs, drives (values), experiences, expectations, emotional charges, and karmic lessons. But believe me when I say it’s almost always wrong. Unless you see a person, thing, or event in its full capacity—both the “good” and the “bad”—and you love it for what it is, as it is, then you are not seeing that thing in its full capacity—its truth.

When we judge others, we are really judging that thing we deny in ourselves. We are so put off by traits and behaviors that we refuse to believe we have or do. In fact, we despise them so much in ourselves, that we will kick another person for showing us exactly how we are—an interesting form of blindness. But we certainly wouldn’t be able to see them if we were not so familiar, ourselves, with the trait.

And our common reactions to this person, trait or behavior tell us even more about who we are. Are you a runner? A fighter? A foot-stomper? Is it your way or the highway? It’s okay—it’s all good. Just know that whatever you fail to love today will come back around tomorrow, and you’ll get another chance to learn to love it. That’s life.

So remember that the weed you see in another is really the weed in you. See how it has benefited you and others, and see how this other person’s expression of it is benefiting you now—and love it! That’s the answer.

4 Responses to Whatever You See, There You Are