Depression or Antidepressants More Severe A Risk in Autism?

Here’s the $64,000 question: When it comes to the alarming increase in children born with autism over the last decade, what seems a more likely factor—a mother’s depression, or taking antidepressant medication while pregnant? Think about that for a minute. Well as coincidence has it, a recent study has just shown a link between a mother’s use of antidepressants during her second and third trimester pregnancy and an increase in the risk of her child developing autism spectrum disorder (ASD).

The disturbing rise in autism has almost doubled over the last ten years, and everything from vaccinations to exposure to flame retardants have been suspected as being the cause of this increase. But a study published in the journal JAMA Pediatrics (online) this week showed that mothers who had one or more prescription for antidepressants filled during the second or third trimester of the pregnancy had an 87 percent increase having a child with ASD, compared with women who did not take the medications while expecting. And women who took selective serotonin reuptake inhibitors (SSRIs), a particular class of antidepressants, which includes Zoloft, Prozac and Celexa, had a more than double the risk of having a child with autism. Finally, women who were prescribed more than one class of antidepressant during the final six months of pregnancy had greater than four times the risk of having a child with autism.

ASD is a neurodevelopmental condition that affects a person’s ability to communicate, interact and behave appropriately with others in social situations; it includes autism, Asperger syndrome or other pervasive developmental disorders. According to the Centers for Disease Control and Prevention (CDC), approximately 1 in 45 children in the United States has autism, and the condition is about five times more common in boys than in girls. The most recent controversy surrounding autism has been fears that the disorder is caused by routine childhood vaccinations, particularly the measles-mumps-rubella vaccination, but recent evidence has shown there to be no association.

In the study, researchers analyzed data collected from all 145,500 pregnancies that occurred in the Canadian province of Quebec over a 20-year period from January 1998 to December 2009, in which mothers had a full-term pregnancy and gave birth to only one baby. They followed up with the children until age ten; 1,054 of the children were diagnosed with ASD. The researchers looked at whether the women in the study had filled a prescription for antidepressants at any time during their pregnancy, or one month before conception.

The analysis found that about 4,700 infants, or 3.2 percent of babies, were exposed to antidepressants at some point during their mothers’ pregnancies. Among these babies, 46 developed autism. But only a mother’s use of antidepressants during the second or third trimester was associated with a greater risk of autism in children (31 exposed infants developed autism). The risk was persistent even after taking into account maternal history of depression. However, there was no increase in ASD risk linked to using antidepressants during early pregnancy.

Antidepressants are not only some of the most prescribed medications within the general population but extending into maternity as well. In fact, 7 to 13 percent of American women are estimated to be taking them while pregnant, according to one study. While previous studies have sought to determine a link between antidepressant use during pregnancy and autism, there have been mixed results. This latest study, however, is the largest of its kind.

“This study is the first to quantify autism risk based on the class of antidepressants used by a woman during pregnancy, and the first to find an increased risk with SSRIs mostly,” said study author Anick Bérard, a professor of pharmacy at the University of Montreal, who specializes in drug use during pregnancy.

These results have got some in the psychiatric profession up in arms, and why wouldn’t they be? As some of the most (over)prescribed meds today, antidepressants are the go-to for medical professionals in general, and psychiatrists specifically. Some doctors are going as far as downplaying the findings. Despite the second and third trimesters being critical for fetal brain development, and that serotonin is essential for this process, and also that previous research in animals has hinted at SSRIs altering certain aspects of fetal neurodevelopment, some in the neurosciences think the points are moot. Says Lars Henning Pedersen, Adjunct Associate Professor at Aarhus University in Denmark, these results can largely be explained by other factors, such as the severity of a mother’s depression.

According to Bérard, depression severity is indeed a possible explanation, and  for which the research group is now conducting studies to look at it, She does point out that her recent work shows an association between antidepressant use and autism only, and is not proof of causation. However, to further recommend antidepressants, particularly SSRIs, during pregnancy is dangerous. Says Bérard,

“The common belief that depression can only be treated with antidepressants is false. I would always be very cautious about saying that anything is ‘safe’ during pregnancy. We have to remember that thalidomide was labeled as ‘safe’ for use during pregnancy.” 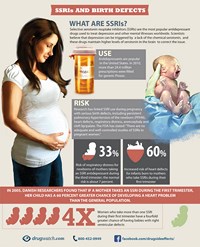 The “critical flaw” in the new research, says Roy Perlis, a psychiatric geneticist at Harvard University, is that it doesn’t fully account for the fact that women suffering from psychiatric illnesses already have a greater risk of having children with ASD. Although the authors controlled for maternal depression, “they don’t really have reliable measures of severity,” he says. As a result, there’s no way to tell whether the children were at higher risk because their mothers were taking more drugs or because the women had more severe depression.

But Bérard states that her group’s study shows that the link between antidepressants and autism is above and beyond its increase in risk associated with maternal depression alone. The results showed mother’s depression to be associated with only 20 percent greater autism risk. Bérard’s opinion is that, “Given the mounting evidence showing increased risk of adverse pregnancy outcome with antidepressant use during pregnancy, our study shows that depression should be treated with other options (other than antidepressants) during this critical period.”

So what do you think? Is severity of depression more likely a potential cause of the near doubling of ASD over last decade? Or is it the increased use of antidepressants among pregnant women? Maybe it is neither; maybe it is just changing guidelines and better diagnosis and recognition. Heck it may even be that antidepressants actually help the fetus of a depressed mother, at least this possibility has been posed by psychiatrist Jay Gingrich at Columbia University. What do you think? You better think about it seriously,  folks, especially if you are planning to have family. Informed decisions bring the greatest certainty – exactly what you want with every decision possible when having a baby. A good pregnancy is a calm pregnancy, and that’s the best you can ask for.

2 Responses to Depression or Antidepressants More Severe A Risk in Autism?