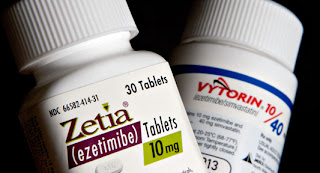 Everyone knows that there are big bucks to be made in the pusher game. From slinging crack to Prozac, profits proliferate when the product promises a miracle cure, or a great way to get high. The risks in the game are a’plenty, but when laws can be loopholed, then all kinds of funny stuff can happen. Take, for instance, the latest in the cholesterol lowering drug racket. Recent reports show that pharmaceutical giants Merck & Co Inc and Schering-Plough Corp may have been up to some funny business regarding published results of their combined drug Vytorin, as well as their marketing and advertising practices. Hold onto your hats because this one’s a doozy.
According to reports, U.S. regulators are contemplating action against Merck and Schering-Plough, the makers of Vytorin, for not releasing the results of a two year study titled Enhance, which sought to study the effectiveness of Vytorin versus the cholesterol lowering drug simvastatin. Let me explain: Vytorin is a combination of the statin drug simvastatin and a drug that blocks cholesterol from entering through the gut called ezetimibe. The idea is that the statin blocks the production of cholesterol from the liver, what we call endogenous cholesterol, while the cholesterol blocker prevents the uptake of cholesterol found in food, or exogenous cholesterol. 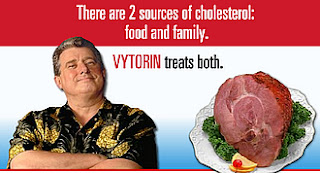 You know–you’ve seen the commercials: “A series of split-screen images of a person and a food item to make the point that cholesterol comes from two sources and can be absorbed from food or manufactured by the body, and that heredity plays a role in the latter. This point is a departure from the commonly held belief that high cholesterol only comes from the food that you eat. In each commercial, the person is dressed, and the food plated, to emphasize the resemblance between the person and the food.” (from Wikipedia)

Here’s the problem: the results of the Enhance test showed that Vytorin, the combo drug, worked no better than simvastatin (brand name Zocor) alone. Get it? The exogenous cholesterol blocker didn’t do squat.

So what! What’s the big deal? 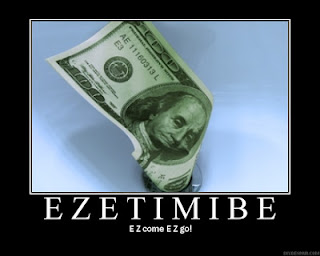 The big deal is that the pharmaceutical companies neglected to publish the results–for 18 months! Whoa. Now why would they do that? Well, let’s see. Uh…big ducketts? Wait, it gets better: Schering-Plough president, Carrie Smith Cox, it turns out, dumps 900,000 shares of company stock, worth $28 million, seven months before the results are published! Woohoo! Even better is that as of two weeks ago, the stocks started sinking like a led zeppelin. You see, once the news got out that Vytorin is no better than generic simvastatin, a much cheaper drug, doctors will stop prescribing it. They haven’t yet, as one report has prescriptions up at 800,000; but I assure you, now that the results are public, prescriptions will have to drop, because everybody knows now, right? You sure do.

How and why does something like this happen? First, you have to understand the pharmaceutical patent game. To get a patent on a drug, a company much go through rigorous testing that can take up to twelve years. Once the government approves the drug, the company gets the patent for twenty years. That means, only they can manufacture and sell that drug during the life of the patent, which means lots of money. Once the patent expires, any drug company can make a copycat drug–same ingredients, same dose–and sell it as a generic brand. That drives prices way down. 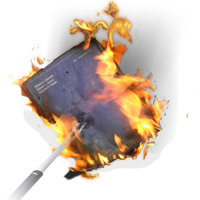 In this case, the patent on Zocor–remember the brand name of the statin simvastatin–ran out in 2006. That was Merck’s baby. Schering-Plough had the drug ezetimbe–brand name Zetia–the one that supposedly blocked incoming cholesterol; clearly, it doesn’t do much. Perhaps, somebody upstairs at the two companies knew this, as they decided to combine the Zetia with Zocor to make Vytorin. Great, now they can get a new patent. At least they know the Zocor works. Hopefully, the results of the Enhance test will look good, and then it’s money in the bank.

But it didn’t look good. Bummer. So they started messing with how they would present the results. Cooking books. Then they couldn’t get it to look quite right, so they delayed publication. Buy some time, buy some time. Finally, shares got dumped, and the house of cards crumbled. Now the House of Representatives’ Committee on Energy and Commerce is investigating. Interestingly, the Committee “actually began investigating Vytorin in December 2007, after the drug makers’ announced a second ENHANCE delay and tried to change the study’s endpoint.”

So there you have it. That’s how business is done in the world of pharmaceuticals. I can’t say I’m all that appalled–c’mon, all kinds of crazy stuff happens in business. But what gets me is the corruption within the scientific community. Isn’t science supposed to be the last corruptible institution. Oy vey; Galileo must be spinning in his grave.