Not the Answer Sleep and Memory 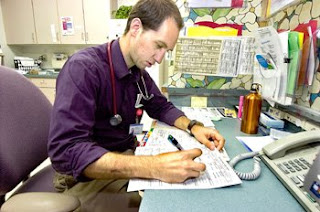 Looks like medical doctors don’t care for this federal health care stuff. According to a recent survey, many primary care physicians plan to quit or drastically cut down their hours seeing patients because they are feeling “overworked.” 7,200 physicians surveyed said they would NOT recommend medicine as a career. Wow! Neither would I.

The doctors surveyed stated that they’re simply bogged down by paperwork; and this paper-pushing leads them to give less time to patients. For any doctor who is in the game to help people, I can attest, this is a frustrating situation. And it isn’t going to get any better with a universal health system, that’s for sure.

The paperwork attached to the federal health programs like Medicare, Medicaid, and other federal and state insurance plans is oppressive. Yes, yes, yes, there is some fraud going on, and the government doesn’t like being cheated. But the strain caused by the paper-pushing rigmarole is just too much. Geez. The feds think it curbs costs, but in fact, it reduces quality of care. And worse yet, our skilled and hard-working primary care physicians are ready to walk away. The only worthwhile career in medicine today is in specialization–surgeons, oncologists, anesthesiologists, and the like. Who wants to see 100 people in a day, and then stay in the office all night doing paperwork? Sure makes research sound good.

I have to sympathize with the doctors here. I understand why all this paperwork craziness is happening. Medical costs are spiraling out of control, and part of the problem is fraudulent billing–from doctors and hospitals. Understandably, insurance companies don’t want to pay for anything that hasn’t actually taken place–you know, double paying for surgeries, paying for patients who weren’t really in the hospital, and so on. But to overburden doctors with safeguards, in the form of government forms, and so much that patients end up losing quality of medical care just doesn’t make sense. Insurance companies just have too much damn power, and it’s time they stop being placed on the top of the priority list. Let them police their own damn suspicions, and if they catch a fraudulent doctor or hospital–then great, throw the book at them. But to have the support of the federal government in this documentation madness is just that–mad!