We’ve got an interesting unplanned study underway in the U.S. this flu season. According to recent reports, only one third of Americans have received a flu shot this year. And based on a survey of 4,000 people, only seventeen percent more are planning on getting one. Nice–a fifty-fifty split.

So what’s the study? Well, public health officials at the U.S. Centers of Disease Control (CDC) recommend that 85% of the population (261 million people) get vaccinated against the flu to prevent pandemonium. The flu kills 36,000 people and sends 200,000 to the hospital in the United States annually.

If you’ve listened to my podcast on vaccinations (Dr. Nick Show, Episode 8) then you know all about herd immunity. Herd immunity is the protection an entire population receives from a certain number of the people getting vaccinated. This number is roughly 80-90%. So by 261 million Americans receiving the flu vaccine, we should in theory be “protected” against the devastation promised by the flu. Hmmmm…. 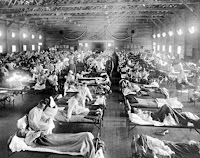 Well it ain’t happening this year. Less than fifty percent of the population will be getting the vaccine. So what do you think? Death and pestilence to sweep through the nation? I guess we’ll see. That’ll be the study. If we experience mass devastation, then I’ll concede–I’ll stop bagging on the flu vaccine. But it’ll have to be a significant difference. Not the same numbers we see every year. I’m betting they’ll be pretty close to the same.

As I keep saying: it is nearly impossible to develop a flu vaccine that matches the current strains in the wild. They mutate too quickly. The influenza virus is the true Master of Disguises.

But I’m excited to see the upcoming results. Even though I think that if the pandemic doesn’t happen, public health officials will rationalize it in one way or another; they’ll never let go of the flu shot fallacy. However, it’ll pretty much prove things to me. Combine it with last year’s flu vaccine debacle (massive illness despite record numbers of people vaccinated), and the flu shot might just be shot.