Breaking Up is Hard to Do Mountain Dew Tooth Experiment 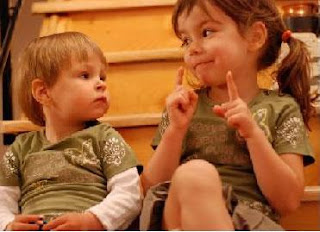 When speaking to your infant or toddler, gesturing will help increase his or her vocabulary. Scientists have found that the more a child can communicate with gestures, the richer the vocabulary when starting kindergarten. And the ability to use hand and arm gestures to express oneself might be translated later into a better education overall.

University of Chicago researchers looked at the communication habits of fifty Chicago-area families of varying socioeconomic status. They found that the children (aged 14 months) whose parents used the most gesturing to communicate with them (and vice versa) had the greatest vocabulary. The gestures were not a form of sign-language but instead a way to communicate everyday concepts and objects–for instance, pointing at an object while naming it, “Yes, that’s a dog,” or signifying directionality like “up” “down” or “big.”

Another interesting find was that families of higher socioeconomic status tended to use more gestures on average than those of lower income and lower educational status. The way parents talk to their children from babyhood onward has been previously found to influence vocabulary early on; and it persists into later life, ultimately leading to better overall education. On average, children from higher socioeconomic families produced 25 meanings in a 90-minute period, while poorer children produced only 13. This study does a good job of explaining at least one reason why poorer children enter kindergarten with smaller vocabularies than their financially better-off classmates. Kindergarten vocabulary is a predictor of how well youngsters ultimately fare in school.

So the take home lesson here is when speaking with Junior, use lots of hand gestures. Hey, you don’t have to be Italian or from Brooklyn to get into talkin’ witchya hands. Heck no, start today–you’ll be doing your kids a great service in the learning department, as communication is the first form of problem solving. Getting started early in brain training is often of great advantage; but saying that, it’s not too late to start with your toddler now, either.

One Response to Childrens’ Vocabulary Linked to Pointing