You know what I love about T.V.? Watching it evolve from a thoroughly controlled entity replete with scripts, laugh tracks and network censorship, to a medium of ‘reality’ documentation—free-flowing, Kardashian-like dimensionality, every turd up for evaluation. Just brilliant!

And nothing more perfect to shed light on one of our most archaic belief systems than the good ol’ fashioned boob tube. The scene couldn’t have been more perfect. While every other industry has been molded and reshaped like a burning rod of steel pounded unmercifully by the hammer of modernity, the outside-in disease model of modern medicine has, oddly, remained unscathed. As a result, the old guard has clung to their outdated beliefs so strongly that they have literally blinded themselves to common sense. No, not common sense in the mass consciousness tomfoolery sort of way that the term is usually meant for, but in the “we-are-having-keen-observations-in-spite-of-the-BS-you’ve-been-trying-to-feed-us” kind of way.

Take the flu shot for example: I’ve reported in this blog numerous times the evidence implicating the vaccine as the biggest medical hoax of the last hundred years. In fact, I got so tired presenting obvious holes in the flu shot bull shot that I vowed to retire from the business. But then along comes a story so juicy, I just couldn’t resist. Thank you T.V. 2013! 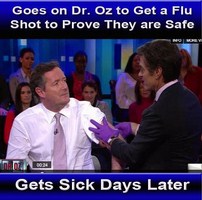 In true dramatic form, American television unleashed two of its brightest stars—Piers Morgan, the pompous British ‘reality T.V.’ journalist, and Dr. Mehmet Oz, the Oprah spin-off in his most famous role as the culture’s leading medical authority—in an attempt to strengthen the establishment’s propaganda on the flu shot. If you are unaware of the script—and you’d really have to have spent the last two decades tucked away in a cave for that to be the case—then let me just fill you in. Goes something like this: If you are to survive the most horrendous scourge of the modern age, The Flu (or swine flu back in 2009), then you’d better get your flu vaccination. Oh…and if you don’t: You’re stupid!

Yes the western medical  model, so convinced of its paradigmatic correctness, comes up with one rationalization after another to explain the notorious ineffectiveness of its modern miracle:

The last one is my particular favorite and what this post is all about. True, ye’ old flu-shot proponents, an inactivated virus like the ones that make up the flu shot can’t cause infection, because…well, they’re dead. But they do, in fact, cause an immune response…uh, that’s the point…and that response will be fraught with symptoms like body aches, fever, congestion, cough, and so forth. And that’s just what happened in the latest episode of “Pound My Paradigm,” starring Piers Morgan who took the flu shot, and Dr. Oz who administered it (video below): The patient got observably ill immediately following the injection….ha ha haaaaaa….I love T.V.!

Now I know that you Neandrethalic noblemen championing the flu-shot are perfectly correct in asserting that Mr. Morgan does NOT have the flu; not from the flu shot anyway. I mean he could…um…have gotten it…um, days, hours, minutes before he actually got the shot…uh yeah, that MUST be it!…that fits the paradigm perfectly. Yes, he got it right before he got the flu shot, because everyone knows…the flu shot works. Duuuuuuuhhhhh!

Thank you, again, Mr. Morgan and Dr. Oz for your fabulous performances on ‘reality’ T.V. Couldn’t have written the script better myself.

*And thank you Dr. Brent for the heads-up on this laugher.