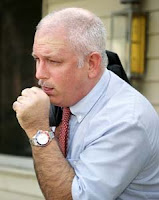 I noticed one of my staff members coughing incessantly. “Get that hack checked out,” I’d snarl at her. She had, and nothing out-of-the-ordinary could be found. We’d try to figure it out, ourselves. Biofreeze, she thought. No way; I hardly use it. Air conditioning. Maybe, but every place in L.A. is air conditioned. Something you’re eating? Doubtful; it’s worse at the office.

“Without a doubt, but you cause headaches, double vision, and extreme irritation to the point of wanting to commit homicide.” Oh…

But then I came across this story: Australian researchers have found that laser printers release a fine, toxic dust that can cause damage “on the scale of inhaled cigarette smoke“–whenever they were in use. Damage that can results from repeated exposure range from lung irritation to cancer. Apparently, it’s the rise in temperature of the internal printer components, toner and lubricating oil that causes the release of particles. The emitted particles then react with the air and ozone to produce the toxins. The printers’ temperatures, and consequent emissions, peaked at one minute of continuous printing, and then declined. They peaked again at two minutes of continuous printing.

There is variability among both printers and cartridges–I’m including a list of high-emitting laser printers below, but I’ll keep my ears open for any more news on this front. I’m sure nobody will be surprised to hear that the printer manufacturers have fiercely disputed the findings of the Queensland University of Technology research team, but facts are facts. Ink jet printers did not show any toxic emissions.

So, my advice: print small jobs that take less than one minute, let the printer cool, perhaps another couple of minutes, and then print the next small job. Larger jobs can be broken up in the same way, taken to Kinko’s, or started right before lunch when you can leave the room as the toxic particles are forming. Leave windows open if possible; or run an air purifier. And never, ever stop looking for the cause of your hacking cough.