Laser Printers Release Toxic Emissions Did You Get Flu Vaccine? 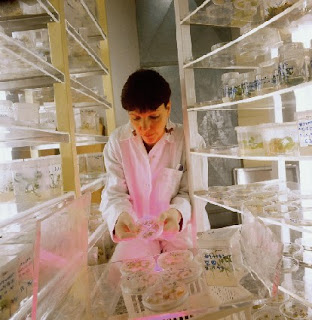 What holds the greatest promise for a disease-free future? Well, if you’ve guessed stem cells, then you certainly know your panacea. Yes, these miraculous little cell line precursors are a shoo-in to rid the world of such maladies as Alzheimer’s, depression and cancer.

But not so fast my little genetic engineering groupies–there’s a hidden danger within the nano-confines of the micropipette. According to a recent story, a family desperate to save their son from a lethal brain disease sought highly experimental injections of fetal stem cells, which triggered tumors in the boy’s brain and spinal cord.

The boy was suffering from ataxia telangiectasia (A-T), a fatal neurodegenerative disease of the brain that ultimately leads to loss of coordination of movement. Because the disease also affects the immune system, frequent infections and cancer can also result. His parents took him Russia when he was nine, and it was in a Moscow clinic where he received the stem cell injections into his brain and spinal cord. He received subsequent injections at 10 and 12 years old.

The boy began suffering greater symptoms of incoordination as well as headaches. While under observation in a Tel Aviv hospital, doctors found two cancerous growths pushing on his brain stem and spinal cord. Doctors at Tel Aviv University removed the growths and found the cells to have both male and female cells present, as well as two normal copies of the A-T genes, which led them to conclude that they were the result of the injected stem cells. Yeesh.

Lot’s of red flags arise with this story. First, stem cell research is in its infancy. Much of its promise is currently a dream; nothing definitive in the science yet. Just because they can clone goats, doesn’t mean they know how to safely use stem cell lines for any medical treatment yet.

Second, if chasing an experimental treatment, wouldn’t it make sense to first determine if said treatment is indicated for your particular condition? Dr. Marius Wernig of Stanford University pointed out that A-T is not a disease conducive to stem cell therapy, so what the hacks in Moscow were thinking (besides where they were going to drink their money) is anyone’s guess.

And finally, if you are going to get a new and highly uncertain treatment done, don’t do it outside the U.S. We’ve got the best medicine in the world here; why go to Russia, Brazil, or the Philippines for a pipe dream? At least someone in this country might be held accountable (well, I guess we’ll see what happens to Octomom Doc, anyway).

Although the boy in the story survived, there are still important points to be made: Genetic engineering is serious business, and it is not to be taken lightly. There is so much we do not know about the science, despite how freely it is discussed by laymen, politicians and the media. We have an incredible responsibility with this technology, and although we should look into its promise to “cure disease,” this story proves that the dark side of genetic tampering can be more than just ideological.