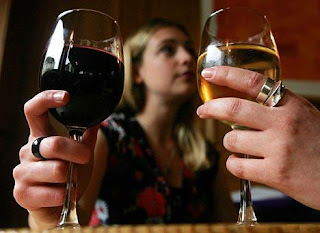 A drink or two a day is thought in some circles to be good for the health. Not so for women, we now know. According to a recent study, even moderate alcohol consumption causes an increased risk for several cancers in women. Youch!

A study of nearly 1.3 million British women found that as the numbers of drinks increased, so did the cancer risks. Breast, liver and rectal cancers were the most likely to develop. Throw in a few Marlboro Lights and oral and esophageal cancers went up too. Whether the women drank beer, wine, or hard liquor mattered not–the more drinks, the higher the cancer risk.

It’s true, studies have found some heart benefits to imbibing the hooch, but risk to benefit ratio must be weighed, especially in light of these findings. Healthy heart or breast cancer? Hmmm…might want to think twice about that one, especially since a good aerobic workout is better for the heart than a shot. The women with the lowest risk in the study drank fewer than two drinks per week. I know what you’re thinking, but saving them all up for an end of the month binge is probably not good either.

Listen, I’m no prohibitionist but just a little food for thought. As cancer slowly becomes the leading cause of illness and death worldwide, this is info everyone should have. So have a Martinelli’s tonight and sleep easy.