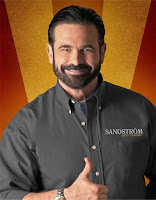 This just in: Well known pitchman, Billy Mays, had cocaine in his system that contributed to his death in June. A recent autopsy report concluded that Mays probably used cocaine “a few days before his death,” but whether or not he was a regular user was inconclusive. The 50-year-old infomercial pitchman was found dead in his sleep by his wife, the unfortunate victim of a heart attack, with cocaine being a likely contributor.

According to recent reports, the surviving Mays family is up in arms about the findings. They say that no outward evidence of Mays’ cocaine use is apparent; but the toxicology tests indicate its presence, along with therapeutic amounts of painkillers hydrocodone, oxycodone and tramadol, as well as anti-anxiety drugs alprazolam and diazepam. Hmmm…..

I guess the only thing I have to say is fifty-year-old men don’t often drop dead in their sleep. When it does happen (think Danny Gans) suspect drug use right off the bat. Cocaine raises arterial blood pressure, and anybody who has ever done it knows how it affects heart rate. The real kicker is that when you use stimulant narcotics regularly, you don’t have to be doing it on the day it stops your heart–Billy Mays is prime example of that.

The Mays’ family is questioning the coroner’s findings and are seeking an independent evaluation of the autopsy findings. The statement said the family was “extremely disappointed” by the release of the information. They said the report “contains speculative conclusions that are frankly unnecessary and tend to obscure the conclusion that Billy suffered from chronic, untreated hypertension, which only demonstrates how important it is to regularly monitor one’s health.”

Listen, I ain’t knocking whatever Billy Mays was doing to enjoy or deal with his life. To each their own. But for those of you who like to play, you better understand that you might just have to pay somewhere down the line; and that payment may prematurely cost you your life. That’s all–just thought you should know.