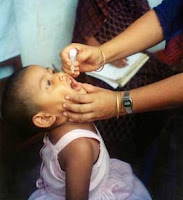 Big trouble in Nigeria. Efforts to eradicate polio in the African nation have taken a wrong turn. The polio vaccine being administered to Nigerians is causing a polio surge. You heard right, Nigerians are contracting polio from the very substance meant to curb it. Pretty scary for outside observers, and pretty awful for the Nigerian people.

According to the World Health Organization (WHO), the polio virus used in the oral polio vaccine (OPV) that is currently being administered in Nigeria has gone through a mutation, causing poliomyelitis, a disease-induced paralysis, in 124 children. Nigerian officials have reported that this number has doubled from the year before, and the cause is primarily from a mutation in the strain contained within the vaccine.

Polio vaccine comes in two administration forms–injectable polio vaccine (IPV), which is the form predominantly used in the U.S., and the oral version. OPV is preferred in third world countries because of it’s low cost and ease of administration. It does provide added benefits over IPV in that it protects the intestinal tract, preventing infection through the mucosal lining of the digestive tract. Because polio is transmitted through fecal-oral transmission, the protection added by the OPV is a big plus. Even here in the U.S., the polio vaccine schedule has been changed to include both injectable and oral doses.

Whereas IPV contains a killed virus, leading to zero chance of mutation, the OPV is a live viral strain (it’s attenuated, which means weakened), and can thus mutate. This comes as a particularly unfortunate circumstance for Nigerian public health, as fears and suspicions have slowed the vaccination process for years. History has shown that Nigerians have distrusted the polio vaccine, believing the vaccine would sterilize their children and infect them with HIV. Their low vaccination rates had led to exportation of polio to twelve different countries as a result.

The WHO believes that Nigeria’s vaccine-associated paralytic polio (VAPP) cases have been occurring since 2005. At that time, aware of the outbreaks, WHO officials believed that the outbreaks would be easily contained, but they have been severely wrong. Some experts believe that the VAPP outbreak can cause an epidemic as bad as one caused by a wild virus (one found in nature). 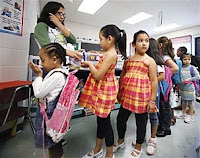 I find this situation scary, since our trusted experts and officials assure us that they have our public health under control. We are advised to vaccinate, to get on lifestyle drugs (statins, antidepressants, and so forth), and to turn to medical authorities for advice on our health care. But what if the authorities are wrong? What if they don’t know everything about a particular procedure, drug interaction, or even physiology? You are aware that we only understand a fraction of the workings of the human body, yes?

Here’s is what I mean: The current crisis in health care is the swine flu. We are being told to vaccinate our children. Countries around the world are stockpiling vaccines, and mass inoculations are being prepared. Schools around the country are getting ready to handle everything from vaccinations to quarantine. Are you confident in the assurances of the government that a swine flu vaccine is warranted, and most of all, safe? You are a braver citizen than me, oh-trusting-one. Knowing what I know about the adjuvant in the swine flu vaccine, as well as knowing that flu is flu, and I probably had swine flu last year (haven’t been so sick in all my life), why would I take the chance. My motto is, as always, god bless the availability of all drugs and vaccines for the people who want them, but I’ll choose the one’s I want to give to me and my family, thank you very much. And I ain’t touching that swine flu vaccine.

One Response to Disease by Vaccination