From Drugs to Vaccines DJ AM Found Dead

Do As Your Doctor Do

I don’t know; what do you think? If 50% of health care workers would refuse the swine flu vaccine, do you think there might be something behind that? According to a recent study that polled 2,255 Hong Kong health workers, even during the height of global swine flu panic in May, less than half were willing to get vaccinated. You don’t say…

According to the report, the workers cited being “afraid of side effects,” and having doubts about, “how safe and effective it would be.” Well, no Schlitz. Du-uh-uh-uh-uh.

But what is obvious to you and me, seems like a real head-scratcher for public health authorities, like the World Health Organization (WHO). Bioethicists are debating the ethics of health care workers protecting their patients by getting vaccinated to the pig flu. But if health care workers believe that it’s bogus–as bogus as the regular flu shot (doctors read the data; they know: In the U.S., about 35 percent of health workers get a regular flu shot, while in Britain, only about 17 percent do), and even possibly dangerous–then good luck. 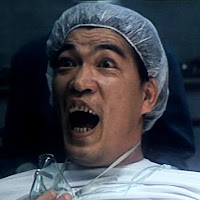 When it comes to vaccinations, freaky side effects usually come about after 1 million inoculations. This was the case in 1976 when a swine flu vaccine was produced then; and the poor suckers who got the stab developed Guillain-Barre syndrome, a temporary paralyzing disorder that can lead to death; however, the numbers were a bit less than one in a million. But I’ll bet you those one in million were none too happy with the results. Add in that pharmaceutical developers will be immune to any lawsuits, and scheiße, who the hell is gonna take the chance.

George Annas, a bioethecist at Boston University says of this recent finding, “Like the lay population, [health care workers] assume they won’t need the shot because they don’t think they will get the flu.” Uh…noooo….since health care workers have a basic understanding of the health sciences, they know when the wool is being pulled over their eyes. Face the facts.