Ever wonder what motivates people to kill, rape, or torture? Ever wonder what differences exist between people who do this and you? Well scientists have found a piece to the puzzle: Psychopathic people have disruptions in their neural connections in parts of the brain that deal with emotions, and handle impulses and decision making.

Recent research published in the latest issue of Molecular Psychiatry shows that the connection between the amygdala, which processes emotions, and the orbitofrontal cortex, which handles impulses and decisions, are dysfunctional. These two brain regions function together to produce actions based on conscious decision. We use emotions to guide these decisions.

Psychopathy is a mental disorder characterized by amoral and antisocial behavior, lack of ability to love or establish meaningful personal relationships, extreme egocentricity, and failure to learn from experience. Psychopaths–people exhibiting psychopathy–have a disruption–researchers called them “potholes” in the neuronal connections (between nerve cells) that allow this function to proceed unimpeded. Normal, non-psychopathic people have no disruptions or potholes.

Although it was only a matter of time before the physiological and structural deformities in psychopathy were uncovered (this is true for all mental disorders, of which depression is not one to my estimation), the pothole findings are not what interest me. For my understanding, a physiological response is a given in any “disorder”. But I always ask the question, “Does the physiological change cause the disorder or is it the other way around?” When it comes to disorders of the mind, I think in general, the physiologic change is a result or manifestation of a faulty or dysfunctional mental process. 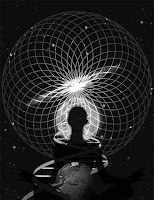 Think about this: our bodies are constantly changing, reshaping and reforming all the time, and our brains are no exception. Our nervous systems change and adapt to stimuli and the environment around us. We develop new neural connections and pathways as a response to stress. Stress can be environmental, mental, or simply learning new things. When we are imbalanced in our perceptions, polarized–that is, when we see more of one side than another–we create different pathways (and probably lose some) than when we are seeing both sides of a situation, when we are in balance. Mental polarity causes electrical charges, just like a battery. This electrical polarization in my opinion is what causes the potholes seen in psychopathy–which is an extreme form of charge. Revisit the definition of the disorder above–doesn’t it describe exactly what I am talking about here?

The unfortunate part of this type of finding is that the current paradigm in psychiatry (still the reigning authority on clinical mental health) is the biological model. The belief is that physiology is cause. In other words, it’s the physical dysfunction that leads to disorder. As a result, the typical treatment options are 1) find a drug to combat pothole formation or 2) screen potential pothole developers and catch before psychopathic behavior manifests–both futile in my opinion.

What I believe needs to be done–and we are probably years off–is to work psychologically with these patients, try to regain perceptual balance through mental techniques, and then focus these techniques on all mental and psychological patients, regardless of the issue. But like I said, we are probably way off from that being the treatment method of choice. So until then we will simply have to marvel in discovery; and with regard to these latest findings, I am in awe.