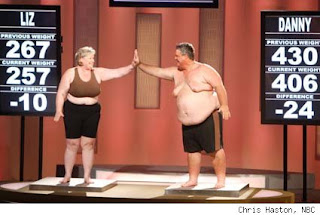 I like The Biggest Loser–it’s good T.V. And I certainly see some value in the show. Saying that, however, it is not necessarily the best approach to weight loss.

According to some experts, The Biggest Loser is counterproductive and dangerous. The show takes obese contestants through extreme exercise conditions and carefully monitored diets, as they compete against each other for the greatest weight loss. The winner at the end of the show wins $250,000.

Some criticisms of the show include that they take a group of people falling to the extreme side of obesity, or the largest people in society, the severely obese (BMI greater than 40) as contestants. Whereas the majority of obese Americans have a body mass index (BMI) of 30+, people with BMIs above 40 represent only 6% of the population. The show, however, uses mostly severely obese contestants. In fact, 17 of the 22 contestants (~80%) this season have BMIs over 40. The problem, critics say, is that it does not accurately represent the population and is, therefore, removed from real world conditions.

Another criticism is that the program is too strenuous and that weight loss happens too quickly, neither of which is healthy. Not only can this pose a danger to contestants but can also be discouraging for those viewers at home trying to lose weight. When people can’t match the numbers posted on the show, some being record weight losses (fastest 100-pound weight loss in seven weeks, and most weight lost in one week–34 pounds), people are bound to get discouraged.

The final criticism is that the rapid weight loss seen on The Biggest Loser is not likely to be maintained. Several former Biggest Loser contestants have regained some or all of the weight they lost while contestants on the show.

Well I’ve got to say…I couldn’t agree more. I do like The Biggest Loser, mostly because it shows that for any person to lose weight, one simple physiological principle must be satisfied: More calories must be burned than taken in. This principle is true whether one has the “obesity” gene, an underactive thyroid, or whether one just likes to eat. To lose weight you’ve gotta burn more than you bring in, period. I think the show demonstrates this princilple quite nicely.

But as I’ve said in a recent article, losing more than one pound per week is unhealthy. And if you are trying to lose weight for any other reason than your own inspiration, forget it–it will never happen, not with any permanence, that is.

If you really want to lose weight, you’ve got to set realistic goals, and do it over the long haul. Making some lifestyle changes will be a necessity, and getting over the mental barriers that attach you to eating will be of the utmost importance.

So as far as The Biggest Loser is concerned, it’ll keep on its game plan of getting the fattest people to lose the most extreme amount of weight in the shortest period of time, healthy or not. Even if they lose a couple contestants one year to heart attack or dehydration, they’ll keep going for one simple reason: It makes good T.V.