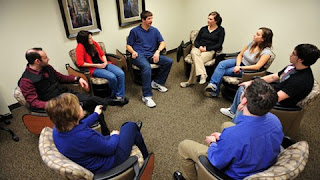 Quite a blow being dealt to group therapy for drug rehab: Studies show it leads to greater drug use by teen abusers. Go figure. According to one study, teenagers at high risk for drug use were more likely to smoke cigarettes and have disciplinary problems at school later in life if they had been enrolled in a teen focus group about drugs. In other words, the environment influenced behavior. Wow, groundbreaking!  In academic speak the phenomenon is known as deviancy training—the negative influence of friends on teen behavior or simply bad influence.

Researchers and some former teen group drug therapy members say that sitting in groups talking about drugs caused the teens to want to do more of the drugs they were abusing at the time. Even more counterproductive is that it made many of them want to try drugs they had never done before but had just heard about in therapy.  Ha ha ha ha ha ha ha….comedy.

Okay so what’s a better solution? Experts suggest that private counseling for teen drug abusers with their families in tow may be a better option.  I couldn’t agree more. In 2000 one researcher from the University of Miami department of epidemiology and public health found that among teens assigned to peer-therapy groups (in treatment for a minimum of four weeks) 17% reduced their marijuana habit, but 50% ended up smoking more. Hmmm…and 57% of teens who were assigned to family therapy showed a significant decrease in drug use, while 19% used more. I’m sold, how ’bout you?

Experts believe that part of the problem is inherent in the philosophy of group drug therapy in general, as advocated by twelve-step programs like Alcoholics Anonymous (AA). The first step encourages participants to admit they are “powerless” over their addiction and to surrender to a higher force.

Although this approach does help many addicts overcome their addictions, some experts believe that teens have difficulty interpreting this message and see it as being doomed to a life of addiction; in other words, some teens may feel defeated and labeled, so they give in to their urges believing that attempted abstinence is futile. 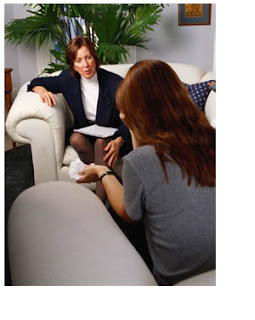 Despite individual and family therapy trumping group rehab in studies, the twelve-step model is still favored by institutions. Why? The obvious reason is economics. Group sessions just bring in more money: when 10-20 individuals can be seen in one hour, it doesn’t take an accountant to add up the dollars. Add to that the wide-availability of 12-step programs, as well as the fact that many drug counselors are former drug abusers and stay true to the method that worked for them, it’s no wonder that it is the method of choice to break teens of their drug-abusing habits.

Oh well, just another story showing the inefficiency of the familiar. It’s so hard for people, institutions, societies and nations to change even in light of a proven better way.  That’s what this blog, Optimal Health, is all about—change—so I know how slowly it can drag sometimes. But I appreciate studies like these, and the unsung heroes that try to spread the word. It’s the only way.

I have been and continue to be critical of twelve-step programs, because I see them as just a substitution for the addicting substance. I guess if you have to choose an addiction, AA is a little less hard on the body, but definitely not easier on the mind, as the addictive personality often gets hopped up on meetings. Just my observation. I am certain without question that individual work can break an addiction, and having families participate should only solidify the benefit. Putting teens in a group with their drug-using peers only makes for a short term dry party—once released, they’ll be back to using with a vengeance. At least that’s what the data shows.