ADD: Pieces to a Puzzle My Airport X-ray Experience

Well surprise, surprise–the U.S. government has finally woken up to its dangerous practice of adding fluoride to drinking water.  A recent report discloses that an increase in “spotting” of childrens’ teeth due to the added mineral has become a concern for health officials.  Oh thank goodness…now perhaps they’ll exonerate Bruno and Galileo, as well.

I don’t know if anybody is as pissed off as I am about this total disregard for public health from the federal government.  I speak in detail of this horrific practice in my book, The Six Keys to Optimal Health.  My research into the fluoridation of drinking water was extensive, as I consulted with many experts in the field; and they all agreed–fluoride in the drinking water is dangerous!

So why has the government continued this practice, despite numerous groups speaking out against it (including the Fluoride Action Network, Beyond Pesticides, and Environmental Working Group, which all threatened legal action if the EPA did not lower its ceiling on fluoride)?  The power of the American Dental Association (ADA), that’s why!

If you haven’t heard me say it before, you might be surprised to learn that I believe the dental association is the most crooked since auto mechanics and used car salesmen.  With virtually no alternative to American dentistry, this industry is free to practice, advise, and get rich as they please, with the public health taking the hits.  The mass fluoridation of the drinking water supply is greatest example of this abuse of power. 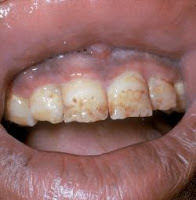 The Centers for Disease Control and Prevention reports that the splotchy tooth condition, called fluorosis, is unexpectedly common in kids ages 12 through 15. And it appears to have grown much more common since the 1980s.  No kidding–experts have warned of this for years.

The report also states that about 2 out of 5 adolescents have tooth streaking or spottiness because of too much fluoride. In some extreme cases, teeth can even be pitted by the mineral–though the powers that be now claim many cases are so mild that only dentists notice it. They say the problem is generally considered cosmetic.  I do not believe this assessment for one instance.

A scientific report five years ago said that people who consume a lifetime of excess fluoride–an amount over EPA’s limit of 4 milligrams–can lead to crippling bone abnormalities and brittleness.  Duh!  Read my book, Kathleen Sebelius!

Speaking of the Health and Human Services Secretary, she could make a final decision on details of the changes within a few months. Why should it take so long, I wonder? 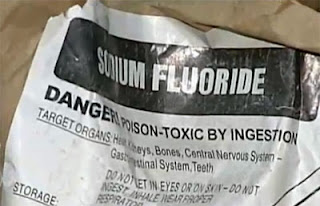 Whereas some health officials are said to be concerned about cavities, I wonder out loud why we all (especially children) should  be put at risk for something addressed by simple tooth brushing.  To insinuate that we need more than brushing and dental cleanings is ludicrous.  Doesn’t anybody else see the enormous scam the Dental Association has levied on us–pay us hundreds of dollars for cleaning, buy special toothbrushes (that you can get in my office!), floss your teeth, stay away from sweets…but wait, that’s not good enough, suckers–we’ve got to dump fluoride in the drinking water, too.  Never mind that it’s an unsubstantiated practice: It’s all based on belief, not empirical evidence.  Read my book.

I was infuriated when Los Angeles succumbed to ADA pressure and started fluoridating in 2007.  And I praise the city of Portland, Oregon for holding out on this bogus practice.  Europe does not take part in the dangerous dumping of fluoride into the drinking water supply.  Is it because they do not care for the health of their people?  Quite the contrary–it’s because they do.  Stay tuned–I will keep you informed of further developments.

**Fluoride levels in drinking water were lowered in 2015 – first time lowered in 50 years!