Another summer-fun warning: Don’t horse around in the swimming pool–it could kill you.  Seriously.

Last weekend, while sitting at the pool, I noticed two young girls, probably in their teens or early twenties, playing a strange game of dunking each others heads in the water and holding it down for several seconds.  Although it was probably only ten seconds at a time, I couldn’t help but think…how stupid.

It got me thinking of a story I read the week before in the New York Post of two young men in their twenties found floating face-down in a Staten Island public swimming pool.  These guys were playing games too, although theirs was of a different nature.  They were practicing breath-holding as a way to condition themselves for an upcoming entrance exam for the Air Force’s elite Battlefield Airmen commandos. 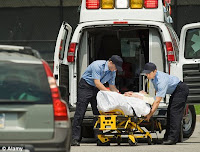 One of the men died at a hospital that day, while the other died five days later.  Both men were twenty-one years old.

These were no out-of-shape poor swimmers, either.  One was a city lifeguard, and heading to the Air Force, the other wanted to be a Navy SEAL.  Making it matters worse, they were only in three feet of water.  Apparently, the men suffered cardiac arrest while holding their breath for an extended period.  Because of the large size of the swimming pool, lifeguards did not see nor respond to the men quickly enough to save them.

The men were regulars at the pool, conducting their conditioning routine by swimming and doing underwater situps (duh!), as well as other aquatic workouts.  A spokesperson for the Air Force stated that the military advises against certain breath-holding exercises or swimming underwater at length to avoid “shallow water blackout,” which can lead to drowning.

So that brings me back to my original point: What is with the stupid water games?  Dunking heads?  Listen, if you didn’t know before, now you know–you can blackout, even in shallow water, and you can drown.  You can have cardiac arrest like our two young countrymen who were both by all accounts in “excellent-shape.”  Don’t think it will happen to you?  This tragic story out of New York shows it can happy to anyone, even the most unlikely victims.  Don’t be foolish in the water.