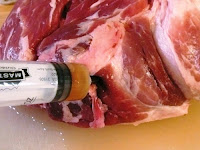 Well it’s about time.  The government is finally putting its foot down and proposing that food companies be required to label meat products appropriately.  That is, any meat having added ingredients–like chicken broth, teriaki sauce, salt or water–should say exactly what it contains.  As you might expect, the proposed plan has meat industry execs fuming.

Most consumers are unaware of these practices and assume that all meat is just that–all meat.  But according to the USDA, about one-third of poultry, 15% of beef and 90% of pork may have added ingredients, which comes out to about 40% of all raw, whole cuts of meat.  The rule will not apply to ground beef, which will be allowed (and does) have added ingredients.

As it stands now, meat is only labeled as “enhanced” or that it contains “added solutions,” which the government rightly believes might be misleading, or not understandable, to the average consumer.  Some of the labeling is also likely not visible.  If the rules are finalized, the label would now have to be part of the product title. An example of the new labels would be “chicken breast–40% added solution of water and teriyaki sauce,” according to USDA.

A National Chicken Council spokesperson says that the industry is now split as some chicken contains added ingredients, while others don’t.  For those that do add ingredients to poultry, the level of additives is generally 15-18% of the piece of meat.

Red meat producers initially objected to the proposed rules.  The American Meat Institute called it “wasteful” and “unnecessary” and said it would cause prices to go up for consumers.  But consumer groups have been lobbying for years to have the truth in labeling rule enacted, as they say some additives are unhealthy. 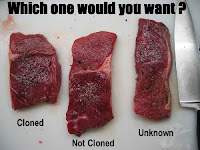 I’m sure that some of the additives used to ‘beef’ up meats is harmless, but why shouldn’t the buying public know exactly what they are purchasing?  If you are going to buy food, don’t you want to know exactly what’s in it?  I do.  Let me make the decision as to what I want to put in my body.  Further, if I’m paying for a food item by the pound, why do I want to pay more for added water?  Duh!

I like this rule, and I hope it passes.  I pointed out the same in my book, The Six Keys to Optimal Health, regarding the “cage free” label, and I haven’t been shy about my thoughts on the use of the term “natural” used on other food items.  Yes, buyer beware, but also make food companies disclose everything on a label including whether something is genetically modified.  I do not belong to the camp that wants to do away with these foods entirely, as I beleive they serve a purpose, but it should be our choice as to whether we want to buy them or not.