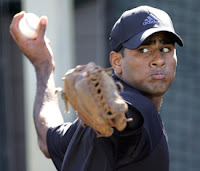 This post is for anybody who suffers from low back pain, but it should interest anybody that plays and/or loves sports, particularly baseball.  A recent study showed that lumbopelvic control in baseball pitchers improved pitching accuracy and endurance.

The study, published in the latest issue of the Journal of Strength and Conditioning, looked at minor league pitchers.  Seventy-five healthy professional baseball pitchers performed a standing lumbopelvic control test during the last week of spring training for the 2008 and 2009 seasons while wearing a custom-designed testing apparatus called the “Level Belt.”  With the Level Belt secured to the waist, subjects attempted to transition from a 2-leg to a single-leg pitching stance and balance while maintaining a stable pelvic position. Subjects were graded on the maximum sagittal pelvic tilt from a neutral position during the motion.

Pitching performance, number of innings pitched (IP), and injuries were compared for all subjects who pitched at least 50 innings during a season.  The belt measurement was taken for each pitcher during the leg transition exercise, with the 7° being the median measurement.  The researchers then assessed the performance of the players over the two seasons.  They found that players with measurements <7° (or the most stable low back and pelvis during motion) had the significantly fewer walks plus hits per inning than subjects scoring ≥7°.  There was no significant difference in injuries between the two groups.

Here’s the take home: Lumbopelvic stabilization–something I work on with all my Los Angeles sports chiropractic patients, particularly those with low back pain, hip pain or any other leg or knee injury–improves athletic performance.  And although this study did not see a correlation between good lumbopelvic stabilization and injury prevention, I can tell you that I see it reduce chronic pain an disability in both athletes and non-athletes alike.

Functional lumbopelvic stabilization comes from a combination of strength, flexibility and balance–three area which I emphasize in my sports rehabilitation practice.  Tight hip flexors, weak glutes and a loss of lumbopelvic control from the abdominals (see abdominal hollows and pelvic tilting) all contribute to loss of stabilization of this vital core area.

True, researchers found no correlation to prevention of injury in the pitchers, as both groups in the study suffered injuries.  But this just shows that sports injuries are multifactorial.  What is unquestionable is that pitching performance did improve with lumbopelvic stabilization, and that I would expect, as I know how important it is in musculoskeletal biomechanics.  I hope you found this study as interesting as I did.